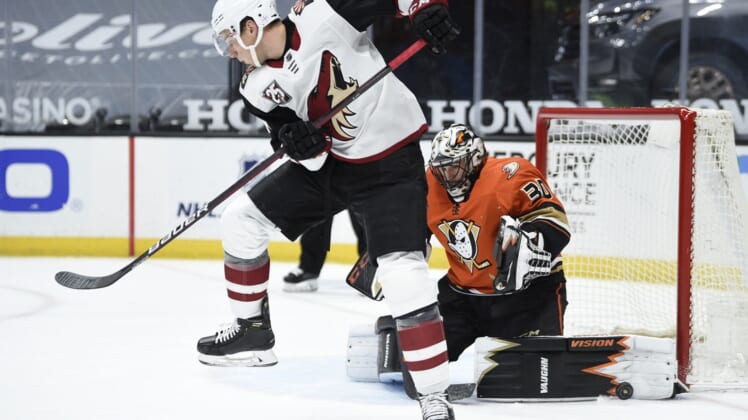 Adam Henrique scored a power-play goal 47 seconds into overtime to lift the Anaheim Ducks to a 3-2 win over the visiting Arizona Coyotes on Thursday.

The Ducks had the man advantage because of a penalty called on Coyotes center Tyler Pitlick at 19:34 of the third period. Anaheim put together a tic-tac-toe passing play to get the puck down low to Henrique at the faceoff circle. His sharp-angle shot beat Arizona goaltender Adin Hill for the win.

The Ducks ended a four-game losing streak, although they haven’t won a game in regulation since Feb. 11, covering 16 games (3-10-3).

Two rookies handled the scoring in regulation for the Ducks. Jamie Drysdale, an 18-year-old from Toronto making his NHL debut, had a goal and an assist, while Trevor Zegras, a 19-year-old from Bedford, N.Y., tied the game with his first NHL goal.

Conor Garland had a goal and an assist for Arizona, and Clayton Keller also scored.

The Coyotes’ goals came quickly, as Arizona grabbed a 2-0 lead on its first two shots in the first period.

It began when the Ducks coughed up the puck in their own end, leaving Nick Schmaltz a free pass to Garland, who was waiting beside Anaheim goalie Ryan Miller. Garland squeezed a shot under Miller’s trapper to open the scoring just 1:13 into the game.

A few minutes later, Garland broke the puck out of the Coyotes end, streaking up ice and battling along the Ducks’ boards. He centered the puck to Keller, who ripped a shot over Miller’s shoulder at 7:07 for the 2-0 lead.

The Ducks stormed back in the second.

Getzlaf dug the puck off the boards and Anaheim cycled the puck back to Drysdale at the point. His knuckling shot cut the deficit to 2-1 at the 12:01 mark.

Drysdale then created Zegras’ chance for his first assist, running a pick in the neutral zone and getting the puck to Troy Terry, who sent a short lead pass toward the net. Zegras did some fancy stickwork in front of Hill and buried the tying goal at 14:30.

The Ducks improved to 2-2-1 this season against the Coyotes, who have lost five straight overall (0-3-2).