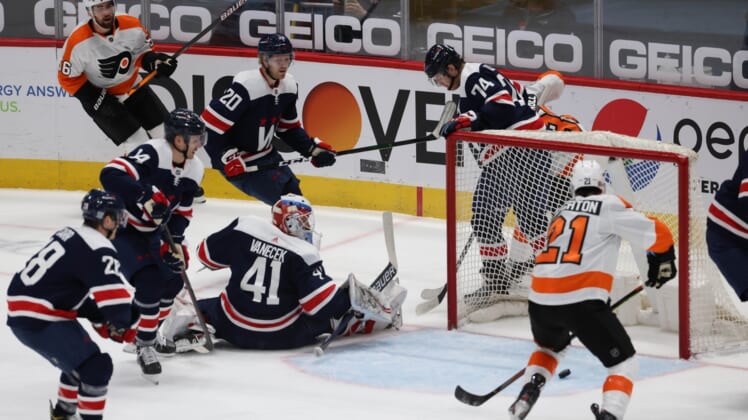 The victory snapped a two-goal losing streak for the Flyers and extended Washington’s slide to three. Philadelphia scored three goals apiece in the second and third periods after the Caps took a 2-0 lead.

Sean Couturier added two goals and one assist after missing three weeks with a rib injury, giving the Flyers a lift as they were outshot 37-22.

Alex Ovechkin (two goals, two assists) had a big day, helping the Caps to that 2-0 lead. He scored on a blast from the left circle for a power-play goal just past the midway point of the first period and, a few minutes later, slid a perfect pass to Tom Wilson (one goal, three assists) for the two-goal lead.

Laughton then scored two straight goals to tie the game for Philadelphia. He got one late in the first period and another from a tough angle early in the second.

Ovechkin then gave Washington a 3-2 lead less than two minutes later when he ripped a slap shot past Carter Hart. But the Flyers answered with two straight goals. The first came on a Robert Hagg shot with 12:10 left in the second period.

Philadelphia took its first lead of the game, at 4-3, when James van Riemsdyk scored on a quick shot from the left circle with 3:24 left.

But the fourth goal ended Washington goalie Vitek Vanecek’s day. Veteran Craig Anderson took over in net, making his first appearance with the Capitals, and Nicklas Backstrom tied it in the final minute of the period with a quick backhand shot off a quick Ovechkin feed.

The Flyers then took the lead 31 seconds into the third period when Couturier scored. After Laughton completed his hat trick to make the score 6-4, Couturier added an empty-net goal late for the 7-4 final.

For Washington, Lars Eller returned after missing four games with an upper-body injury but the Caps were without T.J. Oshie. Evgeny Kuznetsov and Ilya Samsonov remain on the league’s COVID-19 Covid protocol list, and Jakub Vrana was added this weekend.