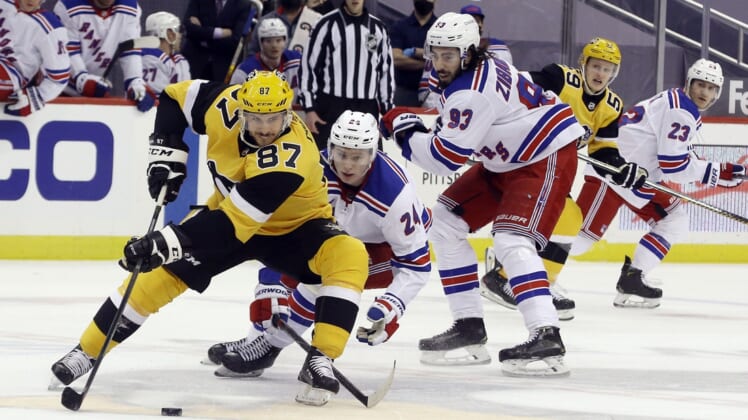 The Pittsburgh Penguins scored a couple of late-period goals Tuesday to top the visiting New York Rangers 4-2 and sweep a two-game set.

Kasperi Kapanen’s goal in the final minute of the second period held up as the winner. Sidney Crosby added a goal and an assist, and Jake Guentzel and Teddy Blueger also scored for the Penguins, who won their third straight game and improved to 11-2-0 at home.

Pittsburgh goaltender Tristan Jarry made 33 saves, including three strong stops in the closing minutes, for his 10th win.

Jack Johnson and Ryan Strome scored for the Rangers. Keith Kinkaid, in his first start of the season, made 23 saves.

Johnson, a former Penguin who was scratched Sunday, made it 1-0 with his first point in a Rangers uniform. His one-timer from the left point made it through traffic at 9:16.

The Penguins tied it with 1:06 left in the first. New York defenseman Ryan Lindgren’s stick broke as he attempted a clearing pass. Crosby jumped on the puck and fed Guentzel, whose rising shot from above the left hash mark made it 1-1.

Blueger scored shorthanded to give Pittsburgh a 2-1 lead at 2:40 of the second. Off a pass from Brandon Tanev, Blueger maneuvered through the left circle, went forehand to backhand has he approached the crease and swept the puck under Kinkaid.

The Penguins seemed determined to get another late-period goal with a sustained stretch in the Rangers end. They cashed in with 19.3 seconds left when Kapanen scored.

Evgeni Malkin carried the puck behind the net and fed Kapanen in the slot. He sidestepped New York defenseman Adam Fox and chipped the puck over Kinkaid’s glove.

Strome pulled the Rangers to within 3-2 with a power-play goal at 3:18 of the third. His pass from the left circle intended for Chris Kreider in front of the net instead banked off the skate of Pittsburgh defenseman John Marino and past Jarry.