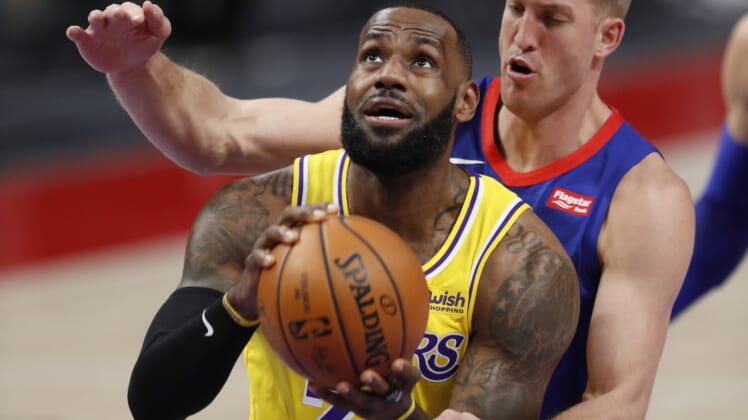 Blake Griffin scored 23 points and the host Detroit Pistons held the Los Angeles Lakers scoreless for nearly seven minutes in the fourth quarter and pulled away to a 107-92 victory on Thursday.

Both teams were playing a second game of a back-to-back, but the Pistons had much more energy as the game wore on.

LeBron James had 22 points but only two after halftime for the Lakers. He also contributed 10 assists and seven rebounds. Kyle Kuzma had 22 points and 10 rebounds, and Talen Horton-Tucker added 13 points off the bench.

Los Angeles’ Anthony Davis sat out the game due to a quad injury. The Lakers lost their second straight road game after going 10-0 to start the season.
The Lakers were clinging to a 58-56 lead at halftime.

Ellington connected on four 3-point tries for Detroit while scoring 14 points in the half. The Pistons committed just one turnover but shot just 41.7 percent from the field. Neither side had a lead bigger than eight points during the half.

Detroit had a five-point possession midway through the third quarter to tie the score at 70. Plumlee converted in the lane while getting pulled down by Kentavious Caldwell-Pope, who was handed a flagrant foul 1. Plumlee drained the free throw, and Griffin then made a bank shot.

That began a 15-2 Pistons run to give them an 80-72 lead. Griffin knocked down two 3-pointers during that span. Detroit carried an 82-78 advantage into the final quarter.

James made a steal and tossed the ball to Horton-Tucker for a transition 3-pointer, cutting Detroit’s lead to 88-87 with 8:40 remaining.

From there, it was all Pistons as Los Angeles went scoreless for the next 6:50. Griffin fired in a 3-pointer from the left wing to get the outburst going. Ellington provided a double-digit advantage with a long ball from the right wing.

Dunks by Plumlee and Grant and a layup by Plumlee made it 104-87 with two minutes remaining.