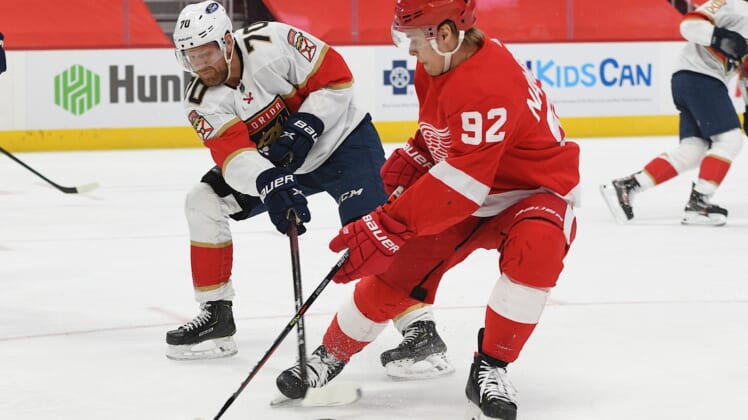 Aleksi Heponiemi scored at 2:45 of overtime in his first NHL game to give the visiting Florida Panthers a 3-2 win over the Detroit Red Wings on Saturday.

Anthony Duclair was stopped on a breakaway by Detroit goaltender Thomas Greiss but the puck stayed in the Wings’ zone. Duclair then slipped a pass across the crease to Heponiemi, who tapped it in for his first career goal.

Anthony Mantha and Tyler Bertuzzi scored the goals for the Red Wings, who have gone winless in their last five games. Greiss was credited with 23 saves.

Bertuzzi suffered an upper-body injury and did not play after the second period.

Detroit once again had five players sidelined due to COVID-19 protocols.

The game was tied at 2-all after the first period.

With Mathias Brome in the penalty box for holding, the Panthers struck first on the power play at 3:06.

Jonathan Huberdeau made a backhanded pass to Barkov behind the net. Barkov slid the puck toward the front and it deflected off defenseman Danny DeKeyser’s stick and past Greiss. Aaron Ekblad also received an assist.

On a delayed penalty, Mantha tied the game at 15:02. Taro Hirose flicked the puck toward the Panthers’ net from behind the boards. It deflected off Vladislav Namestnikov’s stick and bounced toward Mantha, who fired it past Bobrovsky.

Bertuzzi scored his fifth goal of the season and fourth in three games by tapping in a rebound at 16:59. Dylan Larkin took the initial shot and Marc Staal also got an assist.

The Panthers scored in the final second of the period after Staal was sent to the penalty box for high sticking. Yandle banged in a rebound off a Patric Hornqvist shot. Barkov got the second assist.

Yandle committed a pair of penalties in the second period but the deadlock wasn’t broken.

Brome had the best scoring chance in the third period when he got behind the defense but Bobrovsky made a skate save.