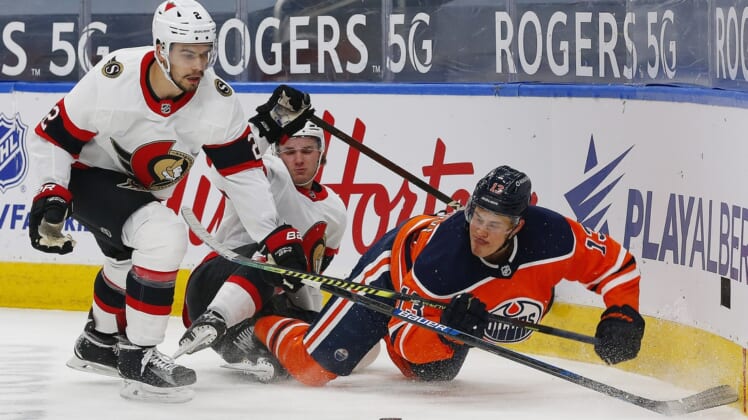 Connor McDavid had two assists as the Edmonton Oilers recorded a 3-2 win over the visiting Ottawa Senators on Monday.

The Oilers improved to a perfect 5-0-0 against the Senators this season. The two teams will play again in Edmonton on both Wednesday and Friday.

Edmonton’s lineup saw McDavid and Leon Draisaitl officially reunited onto the same line, playing alongside Kailer Yamamoto. The new formation immediately delivered four points, as Yamamoto and Draisaitl each scored and McDavid collected his ninth multi-assist game of the season.

Alex Chiasson scored the Oilers’ other goal, a power-play marker in the second period.

The Senators took the lead just 56 seconds into the game on Dadonov’s eighth goal of the season. Oilers goalie Mikko Koskinen didn’t look good in allowing a relatively innocuous Dadonov shot to sneak inside the goalpost.

Edmonton rebounded to outshoot Ottawa by a 12-6 margin in the first period, and Yamamoto equalized at the 7:03 mark. Darnell Nurse’s point shot was redirected into the net by Yamamoto for the forward’s second goal in as many games.

Chiasson and Draisaitl each scored in the second period to give Edmonton a 3-1 lead. Chiasson’s goal snapped an 0-for-8 power-play drought for the Oilers over their last four-plus games.

Just when it seemed Edmonton was taking full control, Stutzle fired a snapshot past Koskinen at 17:57 of the second frame. It was Stutzle’s sixth goal of the season, as after a quick start in his rookie season, Stutzle had scored just once in his previous 16 games.

Koskinen saved 26 of 28 shots. The goaltender has been a big part of Edmonton’s success against Ottawa, posting a 3-0-0 record and .937 save percentage in three games against the Senators.

Making his second start of the season, Ottawa backup goalie Joey Daccord was impressive in stopping 34 of 37 shots.

The Senators collected a 4-3 shootout win over the Calgary Flames on Sunday, but Monday’s loss dropped them to 0-6-0 this season in the second game of back-to-backs.