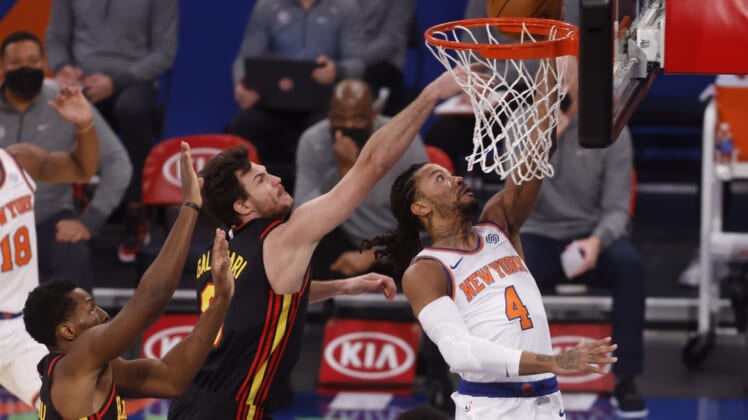 Julius Randle delivered a stellar performance with a season-high 44 points, nine rebounds and five assists as the host New York Knicks recorded a 123-112 victory over the slumping Atlanta Hawks on Monday night.

Randle helped the Knicks match a season high with their third straight win and fifth in seven games. Randle hit two clutch shots during a 14-5 spurt over the final 3:50.

Randle shot 14 of 22 from the field and hit a career-high seven 3-pointers as the Knicks shot 50.6 percent and hit a season high 17 3-pointers.

Trae Young scored 23 points but shot 6 of 19 from the field as the Hawks lost their fourth straight. John Collins added 19, Danilo Gallinari and Cam Reddish totaled 16 points apiece and Clint Capela posted a double-double with 15 and 18 boards for the Hawks, who shot 42.4 percent.

Randle scored 17 points and made seven of eight shots as the Knicks shot a spectacular 68.2 percent and held a 39-28 lead after the opening quarter. The Knicks led by 14 early in the second and settled for a 66-63 lead by halftime.

A 3-pointer by Collins gave Atlanta its first lead at 68-66 a little over a minute into the third. Young’s floater upped the lead to 81-74 with 6:32 left. But following consecutive blocks by Nerlens Noel, Elfrid Payton’s layup forged an 81-81 tie with 4:59 remaining.

Payton’s game-tying layup was part of a 15-2 burst that gave New York an 89-83 lead on Derrick Rose’s layup with 2:37 remaining, and the Knicks held a 95-90 edge going into the fourth on another crafty layup by Rose with 4.3 seconds remaining.