RECAP: Minnesota Wild put an end to skid with win over Kings 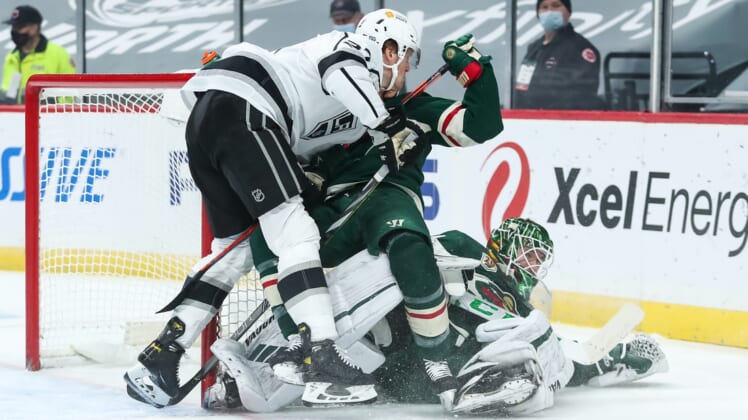 Marcus Johansson scored a goal and an assist and Jonas Brodin had two assists as the Minnesota Wild collected a 5-3 victory over the visiting Los Angeles Kings on Thursday in Saint Paul, Minn.

Minnesota snapped a two-game losing streak and also hit the five-goal plateau for the first time this season.

The newly formed line of Johansson, Joel Eriksson Ek, and Kirill Kaprizov played a big role in the offensive outburst. All three players scored goals, with Johansson also picking up his first assist of the season.

Drew Doughty and Dustin Brown each had a goal and an assist for Los Angeles, while Anze Kopitar recorded two assists. Alex Iafallo scored the Kings’ other goal, a short-handed marker in the third period.

Los Angeles is 1-1-2 in four games against Minnesota this season.

Johansson, Fiala, and Kaprizov all scored during a one-sided first period to give Minnesota an early 3-0 lead.

The Wild ran into penalty trouble in the second period, as Brown and Doughty each scored on the power play. Minnesota entered Thursday’s game with the league’s third-best penalty kill percentage (91.3 percent) and had allowed only two power-play goals from 23 opposition chances.

Once the game finally returned to five-on-five play, Bjugstad scored with 82 seconds remaining in the second period to regain the Wild’s momentum.

Kings defenseman Matt Roy didn’t return to the game after Fiala shoved Roy head-first into the boards from behind during the second period. Fiala was ejected on a game misconduct penalty for boarding.

Sean Walker also left the game after being hit in the face by a Matt Dumba slap shot at 3:47 of the third period.

Kaapo Kahkonen saved 32 of 35 shots to earn his third victory of the season.