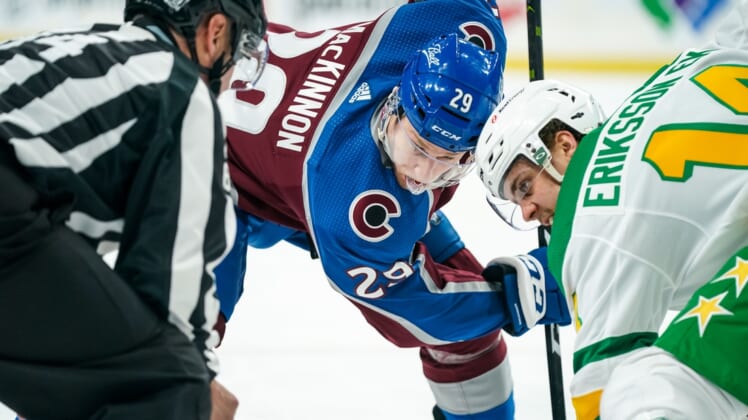 Victor Rask scored two goals, Jordan Greenway had a goal and an assist and Joel Eriksson-Ek had two assists for the Wild. Cam Talbot had 22 saves in his return to the crease.

Joonas Donskoi, Cale Makar and Brandon Saad scored and Hunter Miska stopped 29 shots for the Avalanche, who lost another player to injury.

Nathan MacKinnon had two assists for Colorado before leaving with a lower-body injury. MacKinnon played the first two periods but didn’t return for the third.

Minnesota won the opening faceoff in overtime and never gave up possession. Greenway fed Brodin in the slot, and his one-timer beat Miska. It was his second of the season.

Both teams are dealing with injuries. The Wild placed defenseman Matt Dumba on injured reserve after suffered a leg injury on a collision with teammate on Saturday night and was also without Marcus Johansson with an undisclosed injury suffered Saturday. Marcus Foligno was placed on the NHL COVID-19 protocol Sunday and Kevin Fiala served the second of his three-game suspension.

Colorado scored first when Donskoi buried a centering pass from MacKinnon at 4:33 of the first, his fifth goal of the season. Minnesota answered at 16:19 when Greenway knocked in a loose puck near the crease for his second of the season.

Rask put the Wild ahead just 1:28 in the middle period but the Avalanche got even when Makar scored in the slot at 3:31 of the second, his first goal of the season.

Saad gave Colorado the lead again with his fifth at 7:09 of the third, however Rask’s second of the game and third of the season at 12:34 tied it at 3-3.