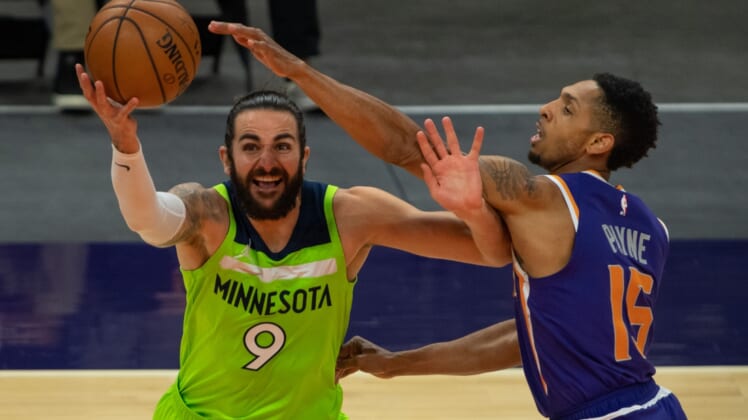 Rookie Anthony Edwards scored a season-high 42 points and Karl-Anthony Towns added a season-best 41 to lead the Minnesota Timberwolves to a 123-119 victory over the host Phoenix Suns on Thursday night in the first of back-to-back games between the clubs.

Towns made five 3-pointers and also contributed 10 rebounds and eight assists as the NBA-worst Timberwolves (10-31) won for the third time in their past five games. Edwards knocked down four 3-pointers and collected seven rebounds as Minnesota improved to 5-17 on the road.

Devin Booker recorded 35 points and six assists for Phoenix, which lost for just the fifth time in the past 23 games. Mikal Bridges notched 17 points and eight assists, Chris Paul added 17 points, seven rebounds, five assists and four steals, while Deandre Ayton had 14 points and seven boards before fouling out.

Edwards split two free throws with 8.3 seconds left to give Minnesota a 121-118 lead and keep the door open for the Suns.

Dario Saric made a free throw with seven seconds left and intentionally missed the second, but Towns collected the rebound for the Timberwolves.

After two Minnesota timeouts, Juancho Hernangomez got loose for a dunk with 4.7 seconds left to seal it.

Hernangomez scored 14 points and Naz Reid added 10 for the Timberwolves, who made 47.3 percent of their shots and hit 11 of 34 from behind the arc.

Langston Galloway scored 10 points for Phoenix, which shot 52.9 percent from the field and made 15 of 36 from 3-point range. The Suns committed 22 turnovers compared to 12 for Minnesota.

Phoenix led by five at halftime before Booker came out strong by scoring 11 of his team’s first 18 points in the third quarter. He capped the surge with back-to-back hoops to give the Suns a 76-61 lead with 7:11 left in the stanza.

The Timberwolves answered with a 13-5 run to move within seven on Towns’ basket with 4:05 remaining.

Phoenix led 91-83 entering the final stanza and was still ahead by six after Paul’s 3-pointer with 5:41 left in the contest.

Edwards converted a three-point play, and Towns followed with a 3-pointer to tie it at 107 with 4:49 to play.

Towns knocked down another 3-pointer 57 seconds later to give the Timberwolves a 113-111 lead, and his team would never trail again.

Booker scored 21 first-half points as the Suns held a 58-53 lead at the break. Edwards had 22 points and Towns added 19 for Minnesota.