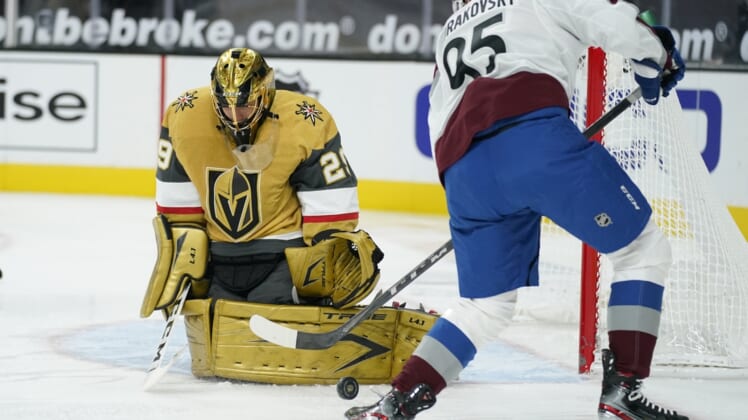 Marc-Andre Fleury had 30 saves while compiling his second shutout of the season and Max Pacioretty scored the only goal of the game as the Vegas Golden Knights moved into first place in the West Division with a 1-0 victory over the Colorado Avalanche on Sunday night in Las Vegas.

It was the 63rd career shutout for Fleury, which moved him to within one of tying Henrik Lundqvist for 16th place on the NHL’s all-time shutout list. It also was his 473rd career victory, which ranks fifth all-time.

Pacioretty scored his team-leading seventh goal of the season for Vegas, which moved a point ahead of idle St. Louis with its fifth victory in its last six games. The Golden Knights also improved to 8-1-1 at T-Mobile Arena, a league high for home victories.

Philipp Grubauer finished with 23 saves for Colorado, which was playing for the first time since a 2-1 victory over Minnesota on Feb. 2 due to a COVID-19 shutdown. The loss snapped a season-best, five-game points streak (4-0-1) for the Avalanche.

Following a scoreless first period that saw Pacioretty hit the post with a shot and Grubauer swat away another fluttering shot near the left post, Vegas took a 1-0 lead at the 1:38 mark of the second period when Pacioretty fired a wrist shot from the top of the right circle around a Mark Stone screen and past Grubauer’s glove side.

Colorado nearly tied it early in the third period on a Jacob MacDonald wrist shot from the left circle that deflected off Fleury’s blocker and then hit the left post before bouncing away.

The Avalanche pulled Grubauer for an extra attacker with 1:35 remaining but managed just a wrist shot by Mikko Rantanen that Fleury easily turned aside.

The two teams continue their four-game set on Tuesday night in Las Vegas before moving north to play an outdoor game on Saturday afternoon on the 18th fairway of the Edgewood Tahoe Resort bordering the Lake Tahoe shoreline in Stateline, Nev. The final game of the series is set for Monday night in Denver.