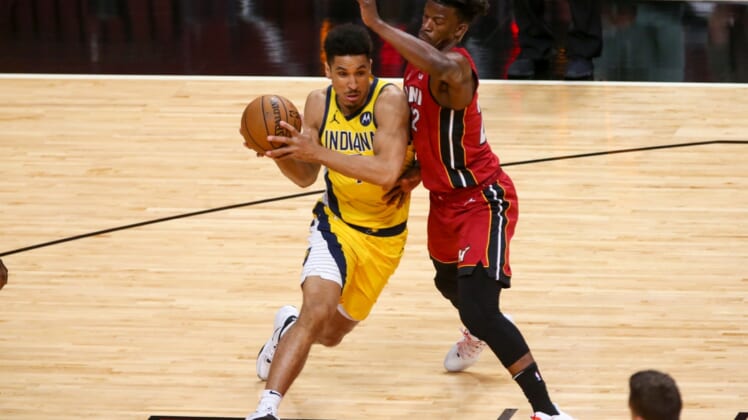 Reserve guard T.J. McConnell had 16 points and game highs in assists (15) and steals (three), sparking the visiting Indiana Pacers to a 137-110 victory over the Miami Heat on Friday night.

Malcolm Brogdon was Indiana’s scoring star with a game-high 27 points on 10-for-12 shooting, including 7-of-9 on three-pointers.

The 137 team points represents a season high for the Pacers. It’s also the most points Indiana has ever scored against Miami, breaking the previous record of 127.

McConnell made 8-of-9 shots from the floor. His only “miss” came with 4:25 left in the game as Goran Dragic blocked his drive.

The Pacers won despite a relatively quiet game from 2021 All-Star Domanta Sabonis, who had a game-high 15 rebounds but was held to 13 points, seven below his average.

Sabonis, who didn’t score until 5:01 left in the second quarter, finished with his 30th double-double of the season.

Miami, which lost consecutive games for the first time since Feb. 13-17, was led by Bam Adebayo, who had 20 points, eight rebounds and five assists. Miami also got 17 points from Jimmy Butler, 16 by Dragic and 15 from Tyler Herro.

Early on, Indiana led 32-30 after one quarter, thanks to 60.9-percent shooting overall, including 4-for-8 on three-pointers. Miami stayed close by converting 9-for-9 on free throws while Indiana did not go to the foul line.

In the second quarter, Indiana went on a 20-5 run, grabbing a 68-58 advantage at halftime. The Pacers continued with their hot shooting, making 62.8 percent of their first-half attempts, including 7-for-15 on three-pointers. Miami shot just 40 percent, including 3-for-15 from long range.

Indiana stretched its lead to 99-82 in the third quarter. McConnell, at this point, already had 10 assists and 12 points on 6-for-6 shooting.

The fourth turned into a runaway for Indiana, other than a 9-0 run by Miami early in the quarter.