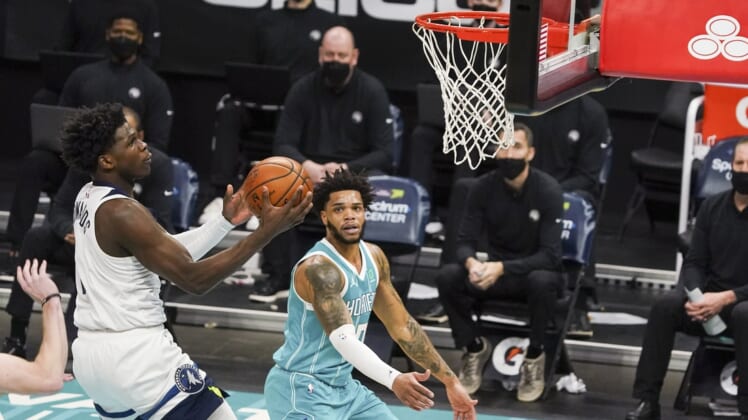 It was a game that included two of the top rookies from November’s draft, with Ball and Minnesota’s Anthony Edwards, who posted 21 points.

Cody Zeller added 17 points, Gordon Hayward had 14 points (despite 5-for-21 shooting from the field) and Miles Bridges finished with 11 points for Charlotte, which was beginning a five-game homestand.

Malik Beasley racked up 31 points and Karl-Anthony Towns, in his second game back from an extended coronavirus-related absence, notched 25 points and eight rebounds for the Timberwolves, who have a four-game losing streak. Beasley made seven 3-pointers and Towns sank five 3-pointers, but the rest of the team combined to go 4-for-20 from long range.

Rozier, who had 26 points in the second half, was coming off a 34-point outing two nights earlier in a loss at Memphis. He has reached 40 points twice this season.

The Hornets shot 19-for-19 from the free-throw line, which helped overcome 20 turnovers compared to Minnesota’s eight turnovers.

Neither team held a lead of more than six points until the final 20 seconds.

Charlotte led 106-100 and had two possessions that went awry trying to extend the lead around the four-minute mark.

The Timberwolves could have gone back on top, but Edwards failed to convert in the lane. Rozier then made two 3-pointers sandwiched around a 3 from Towns, the latter of those shots making it 112-109 with 1:26 to play.

The Hornets looked capable of stretching an advantage in the third quarter, but they couldn’t shake free from Minnesota. The Timberwolves then started the fourth quarter with a burst to take a brief lead.