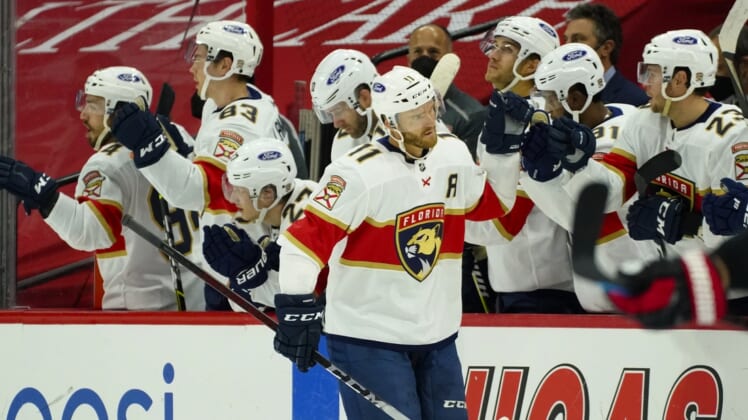 Jonathan Huberdeau had two goals — including the overtime winner — and one assist as the visiting Florida Panthers rallied to defeat the Carolina Hurricanes 4-3 on Wednesday night in Raleigh, N.C.

With 2:29 elapsed in overtime, Huberdeau received a pass from Aleksander Barkov and raced in alone on Alex Nedeljkovic, faking out the young goalie and finishing with his forehand.

The Panthers, who rallied from a 2-0 deficit, improved to 5-0-1 on the road this season, which is the best away-from-home start in franchise history.

Alex Wennberg and Juho Lammikko also scored for the Panthers. It was the first career NHL goal for Lammikko.

Huberdeau’s assist was spectacular as he spun around and dished a perfect backhand pass for a Wennberg tip-in goal.

Chris Driedger made 32 saves for the Panthers, and he also earned a secondary assist on Huberdeau’s first goal.

Staal, who just missed a goal in the game’s first minute when his shot hit the crossbar, got the Hurricanes on the board with 92 seconds left in the first period.

Sandwiched between two defenders, Staal flicked a wrist shot over Driedger’s glove for a 1-0 lead. Warren Foegele got the assist for his short, precise pass in tight quarters.

Just 22 seconds later, Aho made it 2-0 when his deflection got past Driedger’s blocker and rang in off the left post. Brock McGinn set the play up by winning a board battle and getting the puck to Brett Pesce for his shot from the top of the right circle.

Florida cut its deficit to 2-1 on Huberdeau’s power-play goal with 10:52 gone in the second. Keith Yandle got the primary assist for his long stretch pass off the boards, and Carolina’s defense couldn’t catch Huberdeau, whose blistering, high shot beat Nedeljkovic’s glove.

The Panthers tied the score 2-2 with 3:11 gone in the third on Huberdeau’s spectacular dish to Wennberg.

Florida took a 3-2 lead with Lammikko’s goal with 7:54 left in the third. Lammikko squeezed his goal on the short side past Nedeljkovic.

Carolina, on a power play, tied the score 93 seconds later on Trocheck’s deflection off an Andrei Svechnikov pass.