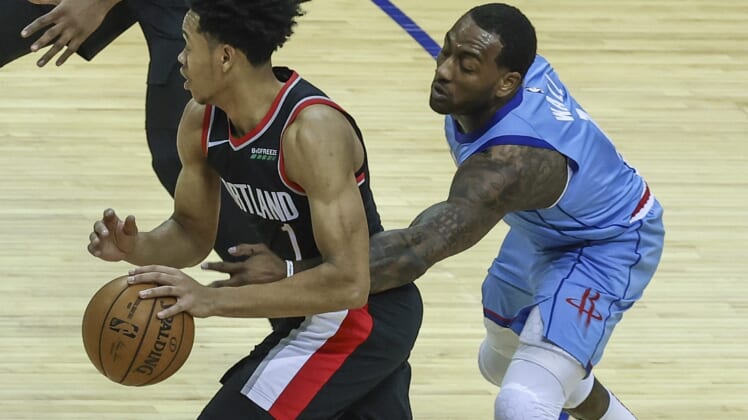 Oladipo scored a driving layup with 26.2 seconds left to secure a three-point lead for Houston, which sealed its fourth consecutive victory with free throws from Wood and Eric Gordon down the stretch.

Portland hit 17 of 41 3-pointers but failed to force overtime when Anfernee Simons missed a contested trey at the buzzer.

Simons hit 4 of 9 from long range and scored 14 off the bench, complementing the sharpshooting of Damian Lillard (5 of 11 on 3-pointers, 30 points) and Gary Trent Jr., who had a stretch of three consecutive treys in the third quarter and two in a row in the fourth that cut what was a 13-point deficit to one at 86-85.

Trent scored 23 points for the Trail Blazers, who were without injured starters CJ McCollum and Jusuf Nurkic.

The Rockets overcame what was a miserable start, missing their first seven shots and 13 of 16 while the Trail Blazers raced to a 25-8 lead. Lillard had 13 points and three assists in the opening quarter to pace Portland, but Houston found a rhythm by turning defense into offense, fueling its comeback with transition points.

Houston tallied 15 fast-break points in the second quarter, and eventually cut the deficit to four at 39-35 with 5:27 left before halftime.

Lillard responded with a driving layup, assisted on an Enes Kanter (13 points, 13 rebounds) basket and then hit a 3-pointer to momentarily stem the tide. But the Rockets kept running and dunking, with a transition dunk by Wood resulting in the first lead of the game for Houston at 49-48 with 1:37 left in the first half.