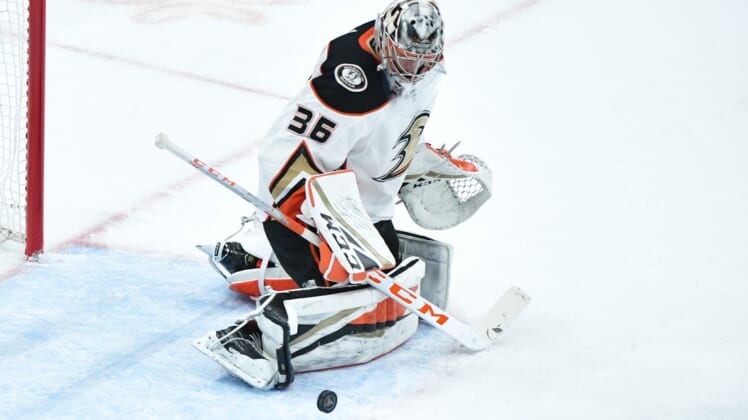 Christian Dvorak scored his second goal of the game with 4:26 remaining to lift the Arizona Coyotes to a 3-2 win against the Anaheim Ducks on Thursday night in Glendale, Ariz.

Conor Garland also scored, and Darcy Kuemper made 14 saves for Arizona, which was shut out 1-0 in each of their previous two straight games.

Jakob Silfverberg and Danton Heinen scored, and John Gibson made 31 saves for Anaheim, which has been held to two goals or fewer in seven of eight games this season.

The Ducks killed a 5-on-3 that lasted 28 seconds, but Dvorak scored with 17 seconds remaining on the second penalty for the 3-2 lead.

Anaheim was the only team in the NHL without a power-play goal until Heinen scored with the man advantage to tie the score 2-2 at 8:57 of the third period.

Heinen also scored in the 1-0 win against the Coyotes on Tuesday.

Garland was credited with the goal that gave the Coyotes a 2-1 lead 52 seconds into the third period.

Garland spun away from Cam Fowler along the left wall, giving him room to center a pass to Clayton Keller. The puck went off the stick of Ducks defenseman Jani Hakanpaa and into the net.

The Ducks scored first for the third straight game

Arizona had the puck behind its own net and Jordan Gross tried to pass the puck through the slot to Nick Schmaltz, but it was intercepted by Silfverberg, who quickly shot the puck over Kuemper’s glove for a 1-0 lead at 3:16 of the first period.

The Coyotes ended their scoreless streak at just over 148 minutes when Dvorak was credited with a goal at 7:43 of the second period.

Dvorak was below the goal line when he tried to pass out front to Derick Brassard in the crease, but the puck went off the shin of Ducks defenseman Kevin Shattenkirk and into the Anaheim net to tie the score 1-1.

Gibson came in with a .948 save percentage and 1.67 goals-against average, tops in the league among goalies with at least five appearances.