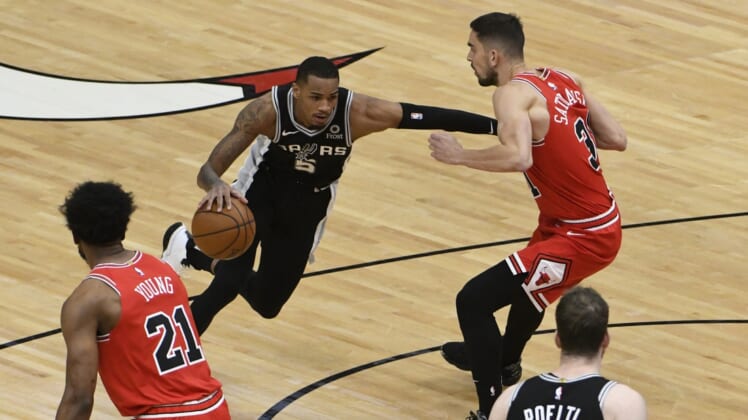 Jakob Poeltl notched 20 points and 16 rebounds and Dejounte Murray scored eight points in a 17-0 fourth quarter run to boost the visiting San Antonio Spurs to a 106-99 victory over the Chicago Bulls on Wednesday night.

San Antonio outscored Chicago 39-19 in the fourth quarter to win for the third time in four games. The Bulls, meanwhile, again squandered a big advantage as they closed a five-game homestand at 2-3.

Chicago led by as many as 23 points in the second quarter and 18 at the break, but the Spurs pulled to within one on a Keldon Johnson layup with 9:03 remaining. The shot punctuated a 15-0 San Antonio run spanning the end of the third quarter and beginning of the fourth.

Zach LaVine ended a scoring drought of 4:12 with a layup of his own to help the Bulls begin to create temporary breathing room. After a Patrick Williams layup gave Chicago an 89-81 edge with 7:03 to go, however, the Spurs scored the next 17 points to seize control.

The Bulls shot 44 percent and were 11-for-33 from beyond the arc, compared with 42.7 percent for the Spurs.

LaVine led all scorers with 29 points while adding six assists and six rebounds. Thaddeus Young had 16 points and eight rebounds, Williams had 10 points and 14 boards, and Lauri Markkanen and Wendell Carter Jr. scored 10 points each.

San Antonio was without leading scorer DeMar DeRozan (20.3 points per game) for the third straight game as he mourns the recent death of his father.

Spurs coach Gregg Popovich said before the game he is hopeful DeRozan will return for Friday’s visit to Cleveland but added “that’s not set in stone.”

Strong ball movement helped the Bulls to a 58-40 lead at halftime. Chicago dished 15 assists before the break. It was the Spurs’ lowest-scoring first half in 37 games this season.

The Bulls showed a tribute video to mark Young’s 1,000th career game, broadcasting it between the first and second quarters.