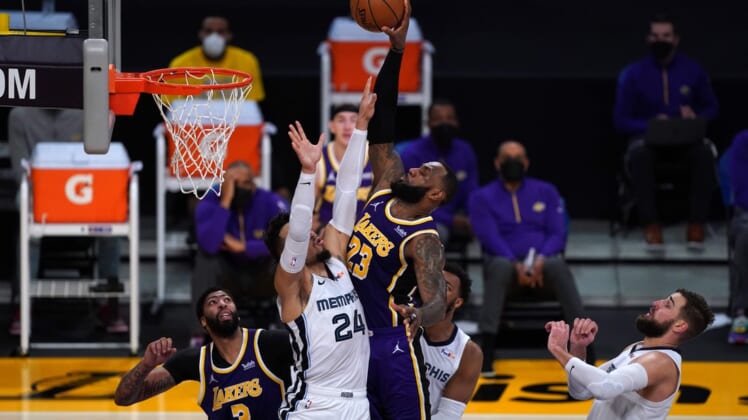 Anthony Davis had 35 points and nine rebounds as the Los Angeles Lakers ran their winning streak to seven games with a 115-105 victory over the visiting Memphis Grizzlies on Friday.

Davis, who returned after a two-game absence caused by Achilles soreness, made 16 of 27 shots from the floor as the Lakers rallied from an early 20-point deficit to prevail. LeBron James had 28 points, nine rebounds and eight assists, and Kyle Kuzma contributed 20 points and 10 rebounds, including five offensive boards.

Lakers big man Montrezl Harrell, who left the game early in the fourth quarter after being hit in the head by a Kuzma elbow, had 14 points and seven rebounds in 16 minutes.

Grayson Allen scored 23 points and Jonas Valanciunas and Ja Morant each scored 22 for the Grizzlies, who have dropped five of their past six contests. Morant dished out 10 assists.

The Grizzlies played without Desmond Bane, who didn’t make the trip due to the death of his great-grandmother, who helped raise him. Brandon Clarke (calf) and De’Anthony Melton (shoulder) also were out.

A 13-4 surge pulled the Lakers to within 63-59 to open the third after a jumper by Davis. But the Grizzlies maintained the lead until James scored the Lakers’ final seven points of the quarter for an 87-82 edge heading into the fourth.

Los Angeles outscored Memphis 41-23 in the third. James scored 13 in the quarter.

In the fourth, the Lakers quickly increased the lead to double digits and were never threatened the rest of the way.

The Lakers trailed by 20 in the first half for the second game in a row. They allowed the Grizzlies to race to a 22-2 lead after a floater by Dillon Brooks with 6:18 left in the first quarter. Memphis led 31-16 at the end of the first.

In the second, the Lakers closed the gap to 10 on three occasions, but a 3-pointer by Morant boosted the Grizzles to a 59-46 advantage at the break.