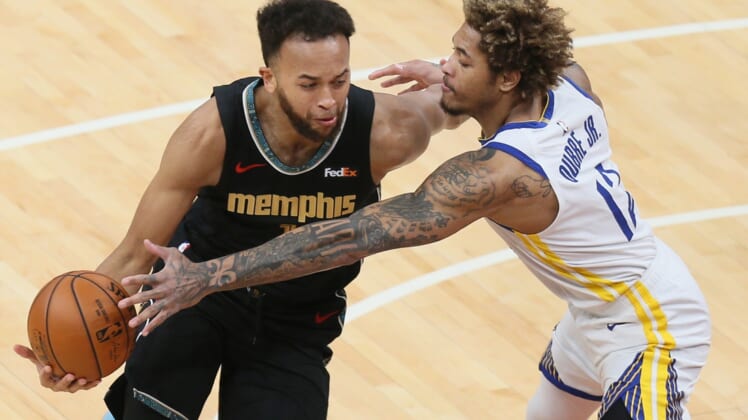 Andrew Wiggins exploded for a season-best 40 points and Jordan Poole, subbing for injured Stephen Curry, missed his season-high by one with 25 Friday night, lifting the short-handed Golden State Warriors to a 116-103 victory over the host Memphis Grizzlies in the opener of a two-day, two-game series.

The Western Conference playoff hopefuls, who had not met this season, will duel again Saturday night, also at Memphis.

Despite playing without Curry, who suffered a bruised tailbone Wednesday in a win over Houston, and key reserves James Wiseman and Eric Paschall, both out for COVID-related reasons, the Warriors took the lead for good in the 10th minute of the game on a Kent Bazemore layup.

En route to a second straight win on a three-game trip, the Warriors went up by as many as 21 in the second quarter and 25 in the third before coasting home.

Ja Morant and Grayson Allen had 14 points apiece for Memphis, which lost for the fourth time in its last five games.

Wiggins’ 40-point game was the ninth of his career, with the previous eight all having come while he was with the Minnesota Timberwolves. It fell seven points shy of his career-high of 47 points for the Timberwolves against the Los Angeles Lakers in November 2016.

Wiggins connected on a season-high six 3-pointers, which was one shy of his career-high.

Poole, who has been productive off the bench since a stint in the G League, made the most of his first start of the season. His 25 points came up just short of his career-high of 26, which he set at Phoenix, also in Curry’s absence, on March 4.

Curry’s brother-in-law, Damion Lee, added season-high 21 points and Kevon Looney chipped in with a season-high-tying 11 for the Warriors, who had been 0-2 in Curry’s previous absences.

Lee bombed in four 3-pointers and Poole three for the Warriors, who outscored the Grizzlies 45-24 from beyond the arc.

Jonas Valanciunas grabbed a game-high 16 rebounds as part of a double-double with 10 points for the Grizzlies, who were coming off an 89-85 win over Miami on Wednesday.