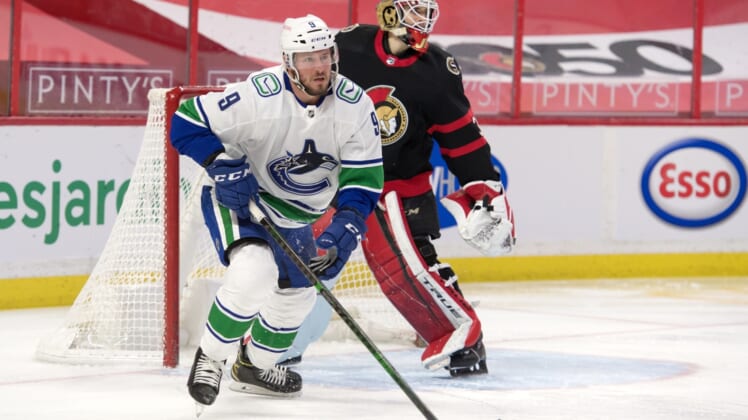 Thatcher Demko continued his strong play in net with 30 saves and Adam Gaudette scored the lone goal of the shootout, lifting the visiting Vancouver Canucks to their third straight win, 3-2, over the Ottawa Senators on Wednesday night.

Bo Horvat had a goal with an assist and Brock Boeser also scored for Vancouver, which has won six of its last seven games and all five meetings with the Senators this season.

After making 44 saves in Monday’s 3-2 overtime win at Ottawa, Demko starred again by stopping all four Senators’ attempts in the shootout to improve to 7-1-0 with a 1.71 goals-against average this month.

With Ottawa trailing 2-1, Josh Norris scored in transition to tie the game at the 5:34 mark of the third period. That goal came minutes after the Senators goaltender Filip Gustavsson made his NHL debut in place of Joey Daccord (19 saves), who needed to be helped off the ice with an apparent leg injury early in the final frame.

Gustavsson stopped all eight shots he faced in regulation and overtime, and the first three Vancouver shootout attempts before Gaudette snuck one through for the winner.

Vancouver wasted no time opening the scoring, just 2:29 into the contest. Off an Ottawa turnover, a wide-open Boeser — in the slot — took a pass from Horvat and beat Daccord for his 15th goal of the season.

Next, Horvat was on the receiving end for an easy tip-in of Nils Hoglander’ pass off a 2-on-1 to make it 2-0 at the 8:26 mark of the opening period.

Ottawa, though, peppered Demko often within the first three minutes of the second period. The Senators were eventually rewarded when Ryan Dzingel successfully pounced on and converted the rebound of Clark Bishop’s shot three minutes into the period to make it 2-1.