One month ago, the St. Louis Cardinals looked baked. Now, they’re in the thick of the National League playoff race.

Although their record hasn’t spiked, so to speak, the Cardinals are now 67-63, which is good for third place in the National League Central. It also has them just two and a half games behind the Cincinnati Reds for the second NL Wild Card spot.

There’s still time for the Cardinals to make their third consecutive playoff appearance, and they have the pieces to make a run. Here are three reasons why they have a genuine chance of finishing off a postseason run.

Statistically speaking, manager Mike Shildt’s offense has been underwhelming this season — again. That said, they have been plausible of late. The Cardinals entered Wednesday fifth in MLB in batting average (.265), seventh in OPS (.778), sixth in hits (235) and tied for 11th in runs (120) over the last month.

That sounds unimpressive but considering this is a team that’s not in the top half of MLB in the aforementioned categories in 2021 as a whole, the Cardinals’ offense is showing signs of life. There is proven talent and sleeping giants across the board.

Nolan Arenado is a slugging machine. Paul Goldschmidt is one of, if not the best first baseman of the last decade. Tommy Edman puts the ball in play at a high level. Paul DeJong has pop.

This unit has a combination of plate discipline, pure contact hitting, power and defensive knack in its arsenal. They’re more than capable of being a lethal unit for a mere month and doing damage in a one-game playoff.

St. Louis Cardinals have a respectable and capable starting rotation

An often knock on the 2021 Cardinals has been starting pitching. At the same time, their scrutinized rotation is actually a respectable unit capable of being a sturdy force.

Sure, Jack Flaherty had a rough 2020 campaign and has been limited to 14 starts this season due to injuries. On the other hand, the Cardinals have been winning games he doesn’t pitch, and it’s not a guarantee that his season is a wrap. In the meantime, the likes of Adam Wainwright, Kwang Hyun Kim, Miles Mikolas and J.A. Happ can get the job done.

Wainwright is an ageless wonder, as he owns a 2.97 ERA across 26 starts at the age of 40. Kim has found success relying on soft contact, as he owns an impressive 3.23 ERA on the year. Mikolas recently got healthy and has found success inducing weak contact in the past. Happ has been superb since coming over to the Cardinals, as he has posted a 2.22 ERA across five starts.

Midseason pickup Jon Lester can be effective going through an order twice and has surrendered just two runs over his last two starts (11.1 innings).

This is a rotation with proven commodities and some individuals throwing their best baseball of the season. They can get the Cardinals through September. If Flaherty returns, it’s an added bonus.

Out of the teams within realistic reach of the two NL Wild Card seeds, the Cardinals are the most proven bunch. Yes, the Reds have played well, but they’re also yet to prove themselves capable of running away with the second seed. The Reds have been playing .500 baseball over the last two weeks and have a consistently shaky bullpen.

The San Diego Padres have uber talent across the board, but it hasn’t translated to the win total that was envisioned. Starting pitching has been lacking, and the offense has been good but not great. Similar to the Reds, the Philadelphia Phillies have the talent to be a playoff team but are inconsistent and have been unable to sustain well-rounded play.

The Cardinals’ schedule the rest of the way is challenging, but they’re playing some teams that they have to overcome to make the playoffs anyway. They have five more games against the Reds, as well as three-game series with the Padres and New York Mets, a playoff hopeful on life support. 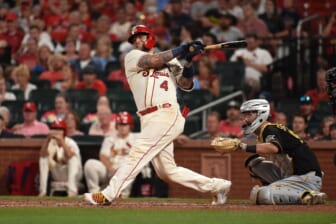 Also Read:
St. Louis Cardinals’ Yadier Molina on 2022: ‘It will be my final season’

The most daunting part of the Cardinals’ schedule comes from having 10 games with the first-place Milwaukee Brewers and a four-game series against the Los Angeles Dodgers.

On the other hand, the Cardinals have seven games against the now-rebuilding Chicago Cubs. Plus, if they’re going to be a playoff team, they’ll have to hold their own against teams like the Brewers, who they have familiarity with. Going .500 against their divisional rival could do the trick.

The Cardinals are one of the more veteran teams in the sport, and that’s a dangerous opponent for a raw and unproven team down the stretch of the regular season and in the postseason. St. Louis certainly has its hands full, but they have every chance to crack the NL Wild Card Game. Anything can happen in a one-game playoff no matter the opponent.