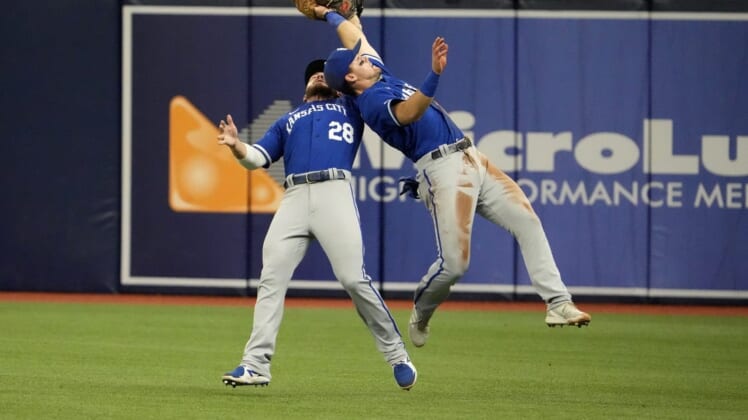 The right-hander, who flirted with a perfect game Sunday, didn’t allow a base hit until MJ Melendez lined a one-out single past him in the sixth inning.

Brooks Raley, Jason Adam and Pete Fairbanks (third save) closed out the game with 3 1/3 scoreless frames as the Rays won for the sixth time in eight games.

Yandy Diaz was 2-for-3 with a double and an RBI, and Isaac Paredes and Harold Ramirez had two hits apiece. Yu Chang had two RBIs.

The Rays welcomed back right fielder Manuel Margot (patella tendon strain), who went 1-for-4 after being placed on the 60-day injured list June 21.

Tampa Bay rebounded from a July loss to Royals starter Kris Bubic by rocking the left-hander for four runs and eight hits in 3 2/3 innings. Bubic (2-8) walked two without a strikeout and wild-pitched a run home.

Bobby Witt Jr. posted a double for KC, but the visitors had only four hits for the second consecutive game and lost for the fifth time in six games.

The Rays stacked their lineup with nine right-handed bats – including two switch-hitters — against Bubic and the strategy was a winner from the start.

After producing two hits but no runs in the first, the Rays broke out with a three-run second that sent eight batters to face Bubic.

With Francisco Mejia (single) and Paredes (double) in scoring position to start the frame, Chang rapped an RBI single before a wild pitch plated Paredes. Taylor Walls looped a run-scoring double to left that sent in Chang.

In the fourth, Diaz belted his second hit — a double to right-center — to score Walls to push the Rays’ lead to 4-0.

Salvador Perez produced a sacrifice fly in the sixth to score Melendez. Rasmussen then departed to the cheers of the crowd, but not before Vinnie Pasquantino’s RBI single against lefty Brooks Raley made it 4-2.

Chang completed the scoring with a sacrifice fly in the eighth.