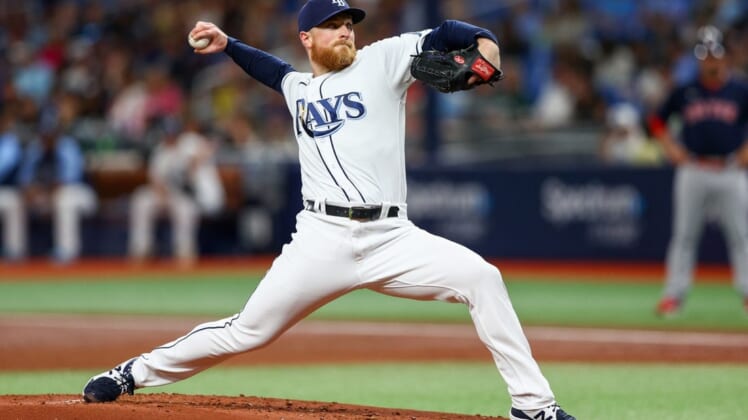 Taylor Walls and Yandy Diaz each drove in two runs during a five-run seventh inning as the Tampa Bay Rays rallied to complete a four-game sweep of the Boston Red Sox with a 5-4 victory on Thursday in St. Petersburg, Fla.

Tampa Bay trailed 3-0 before sending nine batters to the plate and scoring five runs on six hits in the seventh. The Rays have won their last six meetings against the Red Sox and are 9-1 in their last 10 games versus AL East opponents.

Boston pulled within a run in the ninth against Jalen Beeks when Xander Bogaerts hit a leadoff single and scored on Alex Verdugo’s double. Beeks worked out of trouble and induced a Jeter Downs groundout with two runners on for his first save.

Rafael Devers homered among his two hits for Boston, which has dropped 12 of its last 17 games and were swept for the second time this season.

Boston took an early lead on Devers’ leadoff homer in the fourth against Drew Rasmussen. Devers deposited Rasmussen’s 0-2 curveball deep into the right-field seats for his 20th homer of the season.

The Red Sox added to their lead with two runs in the sixth. Jarren Duran singled with one out, stole second base, moved to third on Devers’ groundout, and scored on a wild pitch. Bogaerts followed with a double that scored J.D. Martinez from second base.

John Schreiber (2-1), who had not allowed a run in his last 19 appearances across 17 1/3 innings, replaced Crawford and was greeted by Walls’ two-run single.

With two runners on and one out, Diaz capped the rally with a chopper that bounced over Downs at second base, scoring two runs.