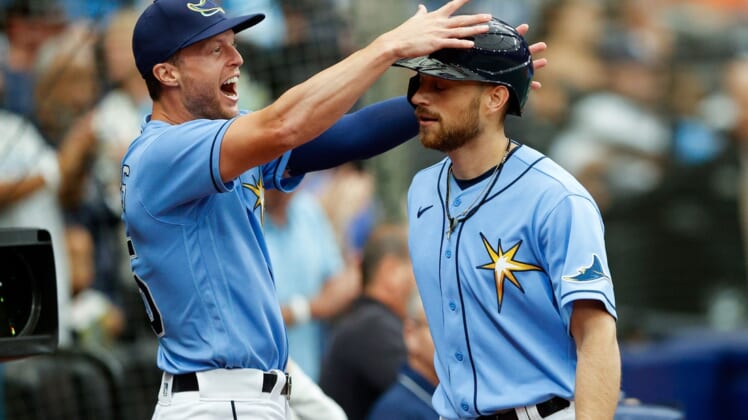 Brandon Lowe slugged a two-run homer, Corey Kluber was strong in his Tampa Bay debut and the Rays beat the Baltimore Orioles for the 15th straight time, 8-0, on Sunday afternoon in St. Petersburg, Fla.

Lowe’s shot, his first of two hits and first homer of the season, capped a four-run second inning for the Rays, who never trailed in their three-game series sweep and are 21-1 in their past 22 meetings with Baltimore.

One of five pitchers combining on the shutout, Jeffrey Springs (1-0) recorded the final out in the fifth.

Wander Franco was 3-for-4 with a double, two RBIs, a run and a stolen base. Harold Ramirez also went 3-for-4, posting a double, RBI and a run.

After relieving in 44 games last year, Tyler Wells (0-1) made his first career start, which turned disastrous after wildness started the second inning.

He surrendered three hits — one being Lowe’s blast — and four runs in 1 2/3 innings, and his two walks both scored.

Ryan Mountcastle doubled and had two of Baltimore’s six hits.

The 6-foot-8 Wells discovered trouble in the second after issuing two walks and having Ramirez’s comebacker pop off his glove for an infield single.

Following a sacrifice fly by Mike Zunino and a run-scoring groundout by Manuel Margot, Lowe jumped on a 93 mph fastball and smashed it to right-center for his first hit of 2022.

Pitching on his 36th birthday, Kluber couldn’t log the final out in the fifth to qualify for the win — allowing a walk to Cedric Mullins and a single to Mountcastle — before being relieved by Springs, who induced Anthony Santander’s flyout.

Baltimore’s best threat was in the seventh against Jalen Beeks — in his first outing since Aug. 25, 2020, before Tommy John surgery — after the first two Orioles reached. But the lefty struck out two and got a flyout against the next three batters.

The Rays put it away with four in the seventh on a two-run single by Franco, Ji-Man Choi’s RBI double and Ramirez’s run-scoring single.