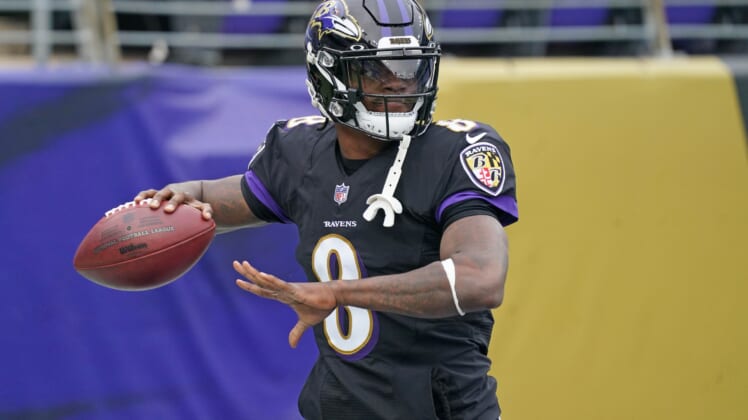 Baltimore Ravens quarterback Lamar Jackson got off to a slow start early in their AFC Wildcard game against the Tennessee Titans on Sunday. Baltimore found itself down 10-0 early with the reigning NFL MVP throwing an interception.

The obvious concern here had to be continued struggles from Lamar Jackson in the playoffs. Including last season’s defeat at the hands of the Titans, Jackson boasts an 0-2 career postseason record.

At least for one play, Jackson quieted the critics. With his team down 10-0 in the second quarter, Jackson burnt the Titans on a 48-yard touchdown run.

WATCH: Lamar Jackson scores from 48 years out against the Titans

Your eyes are not deceiving you. Lamar Jackson legitimately made four Titans defenders miss before pretty much outrunning the entire secondary en route to a game-tying 10-yard touchdown run.

At some point, the Ravens will need to pass the ball to win on Sunday. In no way does that take away from the brilliant play you just saw above.

For Lamar Jackson, this comes on the heels of a regular season that saw him put more than 1,000 yards on the ground. He’s the only quarterback in NFL history to accomplish that feat in consecutive years.

For all the criticism he has received during what can objectively be called a down season for the talented quarterback, Jackson still finds a way to amaze onlookers. That did not change with this run on Sunday.