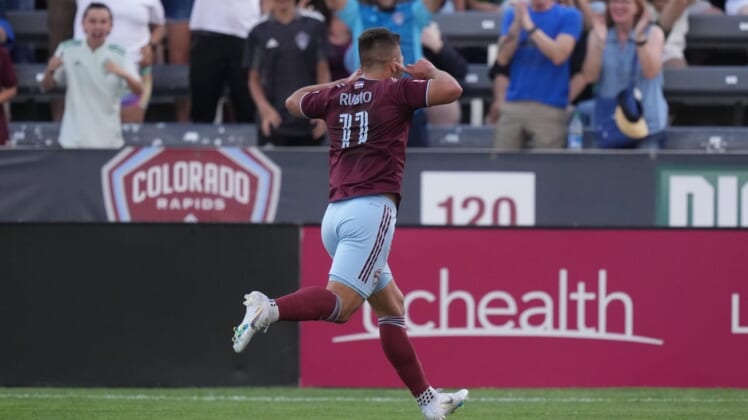 Jonathan Lewis assisted on both goals as Colorado (6-8-6, 24 points) ended a six-match winless stretch (0-3-3). The victory was the first for the Rapids since a 1-0 home win over the Seattle Sounders on May 22.

Colorado’s William Yarbrough had two saves while recording his seventh shutout of the season.

Los Angeles took 18 shots but put just two on target. The Rapids placed five of their 10 shots on net.

Jonathan Bond had two saves for the Galaxy.

Colorado scored in the 20th minute as Lewis fed the ball to Rubio, who drove a right-footed shot from just outside the box into the left corner of the net for his ninth goal of the season.

The Rapids appeared to have made it 2-0 five minutes later when Bryan Acosta’s corner kick was headed into the net by Zardes. But the play was reviewed, and Colorado’s Keegan Rosenberry was ruled offside on the header and the goal was nullified.

But Zardes scored a goal that counted in the 75th minute.

Lewis was dribbling in the box before sending a back-heel pass toward Zardes, who sent a right-footed shot past Bond to give the Rapids a two-goal lead. The goal was the third for Zardes in 12 games since being acquired by Colorado.

The Galaxy were unable to stage a rally. Julian Araujo was wide right on a right-footed shot in the 87th minute and Los Angeles didn’t threaten to make it a game.

Yarbrough stymied Los Angeles’ Derrick Williams in the 19th minute. Williams was right on the doorstep and sent a left-footed rocket at the net that Yarbrough knocked away.