The tight end position in the NFL is fascinating one and also a position that teams utilize in various formations. While some tight ends serve as their team’s primary pass-catchers, others do not receive a consistent amount of targets.

For this ranking in particular, the focus is on the tight ends who tend to be regularly involved in the passing game. After all, who doesn’t enjoy watching an opposing team’s defensive backs trying to bring down a 6-foot-6 tight end as he heads to the end zone, football in hand?

Here, we have ranked the top-15 tight ends, starting with a new face in a new place.

Ebron arrives in Indianapolis after averaging 517.5 yards and 46.5 receptions per season during his four years with the Detroit Lions. Now, after inking a generous two-year, $15 million deal, Ebron is expected to line up in various formations, according to head coach Frank Reich. With the alleged healthy return of quarterback Andrew Luck, Ebron should hopefully keep pace with his previous production.

Luck has always kept his tight ends heavily involved in the passing game. The goal for Ebron would be that he builds on the four touchdowns he produced in his final year in Detroit. 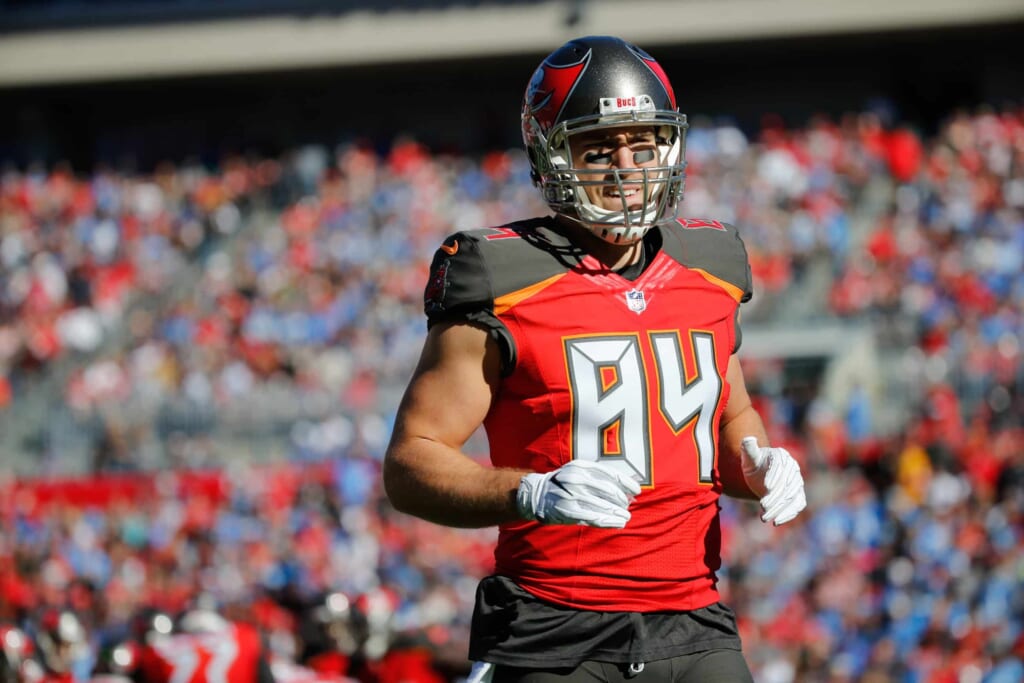 The Bucs decided to commit to Brate for another six seasons after he recorded 48 receptions, 591 yards and six touchdowns in 2017. He has been a go-to receiver for quarterback Jameis Winston since 2015 and has caught 70 percent of targets while scoring 17 times.

Entering 2018, the 27-year-old tight end will start his season catching passes from quarterback Ryan Fitzpatrick while the aforementioned Winston serves his three-game suspension.

At the ripe age of 37, Watson will begin his 15th career season when he reunites with the Saints. Last season saw Watson play with the Baltimore Ravens when he tallied 61 catches for 522 yards and four touchdowns. But prior to this, Watson caught passes from quarterback Drew Brees in 2015 when he recorded career-highs across the board.

That year Watson racked up 74 receptions, totaling 825 yards and six touchdowns. If the chemistry is still there and Watson stays healthy, more of the same production could be in order.

Despite sharing the ball with Brate, Howard had a promising and productive year, catching 66.7 percent of his targets. Before landing on IR, Howard recorded 432 yards and six touchdowns in the 14 games he played in his rookie year.

These numbers should be on the rise for this hand-picked tight end the Bucs selected 19th overall in 2017. Though, Winston’s inconsistent quarterback play and looming suspension keep us from promoting Howard any higher within this ranking.

Playing an entire season without Luck, Doyle was quite productive throughout 2017, snagging 80 receptions for 690 yards and four touchdowns. Now with Luck slated to return, Doyle stands to build on this performance.

Even with Ebron in the picture now, Doyle should still see plenty of targets from a quarterback who has averaged 38 passing attempts per game since 2012. Very much a part of the Colts’ passing game, Doyle has averaged an impressive catch rate of 78.3 percent. 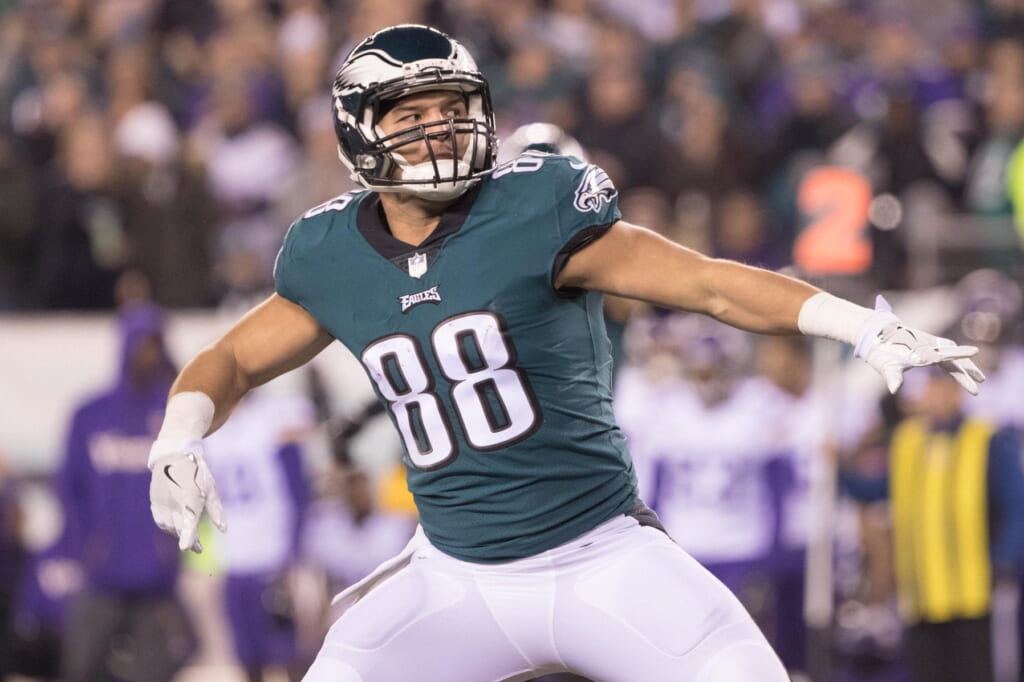 Bears fans should be excited to see their new tight end take to the field this fall. Head coach Matt Nagy has cool plans in mind for Burton who will play a unique “U” spot as both a tight end and wide receiver. Think back to the high volume of targets — 122 — that Kansas City Chiefs tight end Travis Kelce received playing for Nagy in 2017.

Now it is Burton’s time to turn heads as he inherits a prominent starting role catching passes from second-year quarterback Mitch Trubisky. Soon enough, Burton should be a household name when it comes to high-producing tight ends. The upside here is sky-high.

When healthy, Reed can be a beast as he plays a combination of both tight end and wide receiver. He will look to hit the field catching passes from his new quarterback Alex Smith, who loved throwing to the aforementioned Kelce in Kansas City. This bodes well for Reed, who has averaged 54.1 yards per game and scored 22 touchdowns in five seasons.

But of course all of this will become irrelevant should Reed fall victim once again to the injury bug this fall.

After nearly re-joining the Saints, Graham chose to migrate to the Packers where he will work with one of the most elite quarterbacks in the business. This new adventure for Graham comes after he averaged 683 yards per season playing with the Seattle Seahawks. It is worth noting also that the 6-foot-7 tight end found the end zone 10 times last season.

Though, that touchdown count might be a bit of a stretch in projecting Graham’s scoring outlook for 2018. Wideout Davante Adams will likely remain a touchdown vulture when it comes scoring points.

Monitoring how Graham gels with Rodgers in training camp should give us an idea of things to come.

At times, Engram was the lone bright star on the Giants’ offense during his 2017 rookie campaign. The youngster managed 64 catches which resulted in 722 yards, while finding the end zone six times. That was not too shabby, and he became quarterback Eli Manning’s go-to pass catcher.

Even with wideout Odell Beckham Jr. returning, Engram should still make a significant impact on an offense that will be desperate to recuperate from a three-win season. 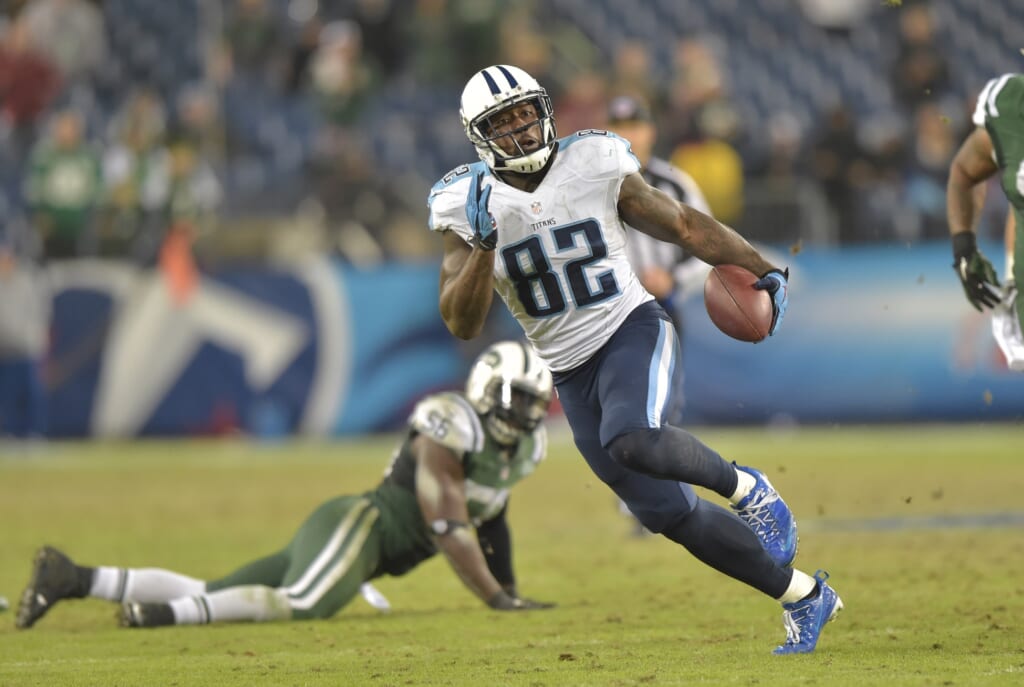 Entering his 13th season in the NFL, Walker is still performing at a very high level. The 6-foot-2 tight end led the Titans with 74 receptions last year while recording 807 yards and three touchdowns. He will continue to remain a focal point as one of quarterback Marcus Mariota’s favorite targets.

Walker seems to have only gotten better with age, after averaging 54.7 yards per game during his five seasons playing in Tennessee.

Olsen has played extremely well since pairing up with quarterback Cam Newton in 2011. Now, the 33-year-old tight end will look to rebound from a 2017 injury-plagued season. Prior to last year, Olsen had three 1,000-plus yard campaigns from 2014-16. He also found the end zone 16 times in this stretch.

Provided Olsen is 100 percent healthy after dealing with a foot injury last year, he should resume his role as one of Newton’s favorite targets and red-zone threats.

There is a lot of upside to Rudolph, who is performing quite well in the prime of his career. For the last three seasons, Rudolph has remained healthy, starting 48 games straight. During this time, the 28-year-old tight end has averaged 622 yards per season and has scored 20 times.

Now, Rudolph will be on the receiving end of quarterback Kirk Cousins, who is no stranger to keeping his tight ends heavily involved in the passing game. With that said, Rudolph stands to see an increase in the 81 targets he earned last year catching from quarterback Case Keenum.

As we are winding down to the league’s top-ranked tight ends, Ertz has rightfully earned a No. 3 spot after producing 824 yards and eight touchdowns last season. The uptick in touchdown scores was quite the bonus from the six combined Ertz scored in 2015-16.

We are now seeing a very consistent pattern in Ertz’s production after he averaged 109.3 targets and 831 yards during his past three seasons. The 27-year-old Super Bowl champ will look to keep this up and possibly then some, with the healthy return of quarterback Carson Wentz pitching him passes.

Kelce has really found his groove as one of the Chiefs’ top playmakers. During his past two seasons, Kelce has averaged 1,081 yards while finding the end zone 12 times. His touchdown catches will now be dependent on second-year quarterback Patrick Mahomes getting him the ball.

Thankfully, Mahomes has a strong arm, and Kelce at a bruising 6-foot-5 should remain a top pass-catching option. Kelce will return to the field after garnering a career-high 122 targets in 2017. 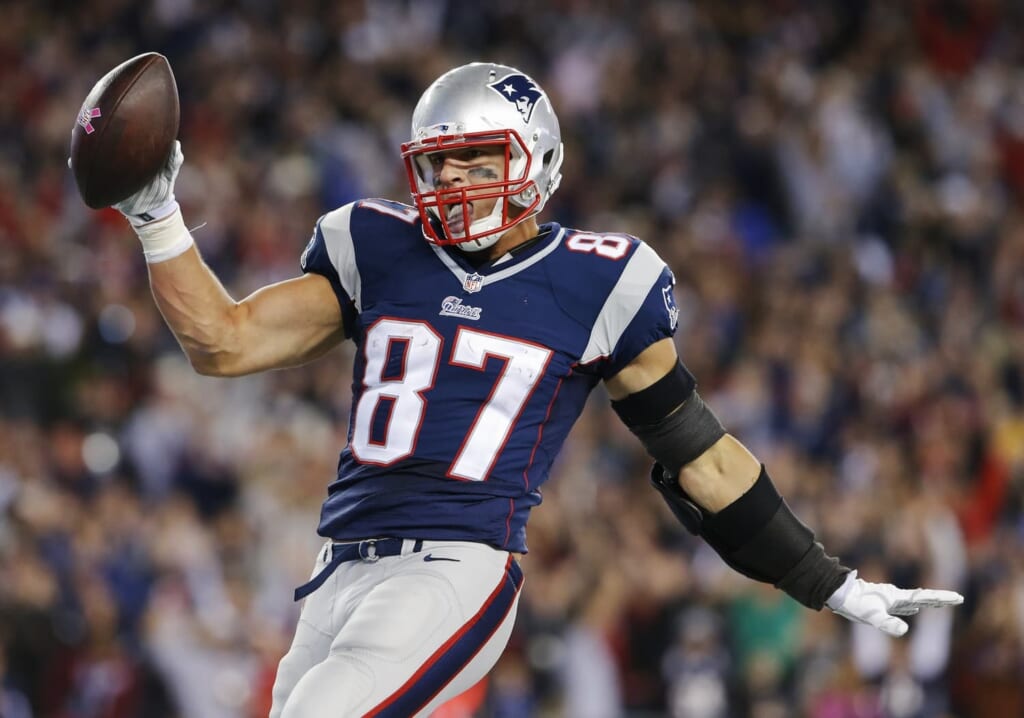 In not-so-shocking news, Gronkowski rounds out this ranking at No. 1. Physically unable to be taken down at times, Gronkowski is returning for a ninth season after averaging 77.4 yards per game and scoring eight times in 2017.

If his health prevails, he is an easy lock to keep pace with these numbers. Quarterback Tom Brady targeted Gronk 105 times last year and there is absolutely no reason to believe these two won’t continue to dazzle this fall.

Gronkowski has a total of 76 career touchdowns on the books along with 70.4 average yards per contest.