Stout defense will always be essential to success, but college football is currently blessed with some of the best offensive minds in the game.

These standouts have worked their way into a head-coaching position in the Football Bowl Subdivision, and several have earned the definition of job security. They’ll likely never be fired, barring an off-field disaster.

While others are still climbing the coaching ladder, it shouldn’t be long before they receive a prominent offer.

Note: This list wouldn’t feel complete without a mention for Montana coach Bob Stitt, whose fly sweep and screen concepts are used all over the FBS. 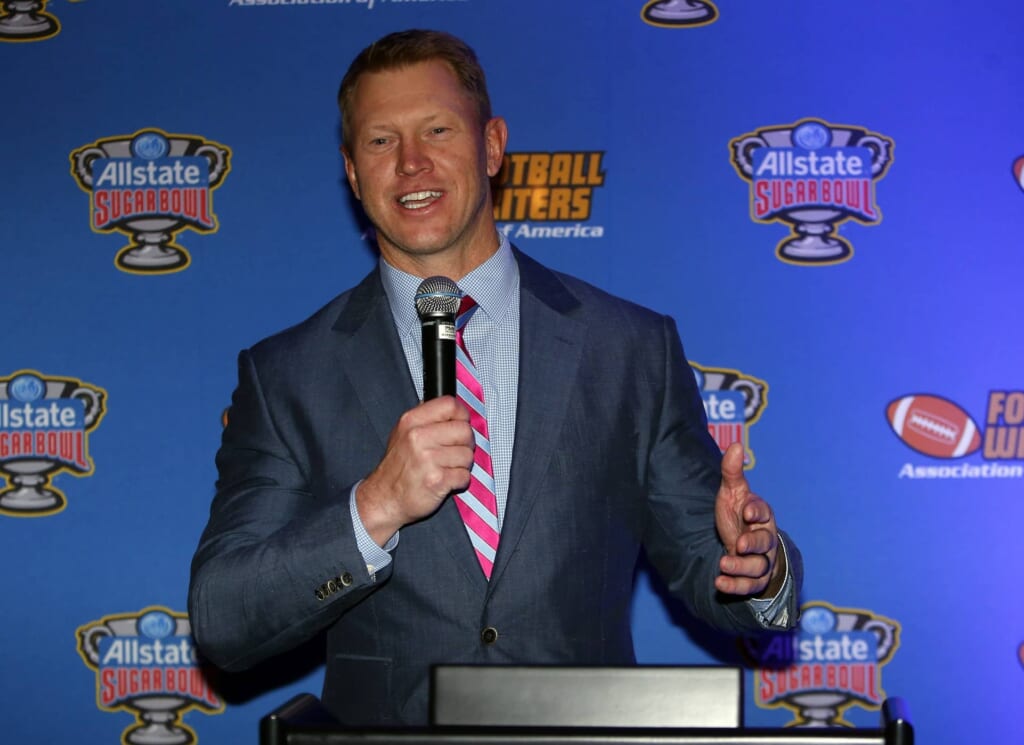 How his system translates to the Big Ten will be fascinating to observe, but there’s no doubting its success so far. Scott Frost honed his craft at Oregon, serving as an assistant for Chip Kelly and the offensive coordinator to Mark Helfrich. Upon taking the Central Florida job in 2016, Frost effectively shaped the Knights into “Oregon East.” UCF went winless (0-12) the year before his arrival yet departed the school celebrating an undefeated (14-0) mark last season. That turnaround is a direct result of Frost’s up-tempo spread thriving.

When Urban Meyer returned to the coaching ranks, he sought a fresh perspective for Ohio State’s offense. That led him to Tom Herman, then a young coordinator at Iowa State. He helped Meyer grow as a coach, and the accomplishments vaulted Herman to a head-coaching position at Houston. There he utilized the smashmouth spread attack and turned in a 22-4 record, securing the leap to Texas for 2017. Although his debut season in Austin was disappointing, Herman has earned a bit of patience as he retools the personnel to fit his system.

The evolution of offense is exemplified in Mike Gundy’s career, and the Oklahoma State coach is among the brightest coaches. During his time as a player and assistant, OSU relied on the I-formation. However, the program’s rise coincided with the hiring of Dana Holgorsen and a change to his version of the air raid. That breakout 2010 campaign led to an opportunity at West Virginia, where he introduced Stitt’s fly sweep and screen concepts and obliterated Clemson in the 2012 Orange Bowl. Holgorsen’s offense is simplistic, yet it’s become one of the most difficult to contain on a yearly basis. 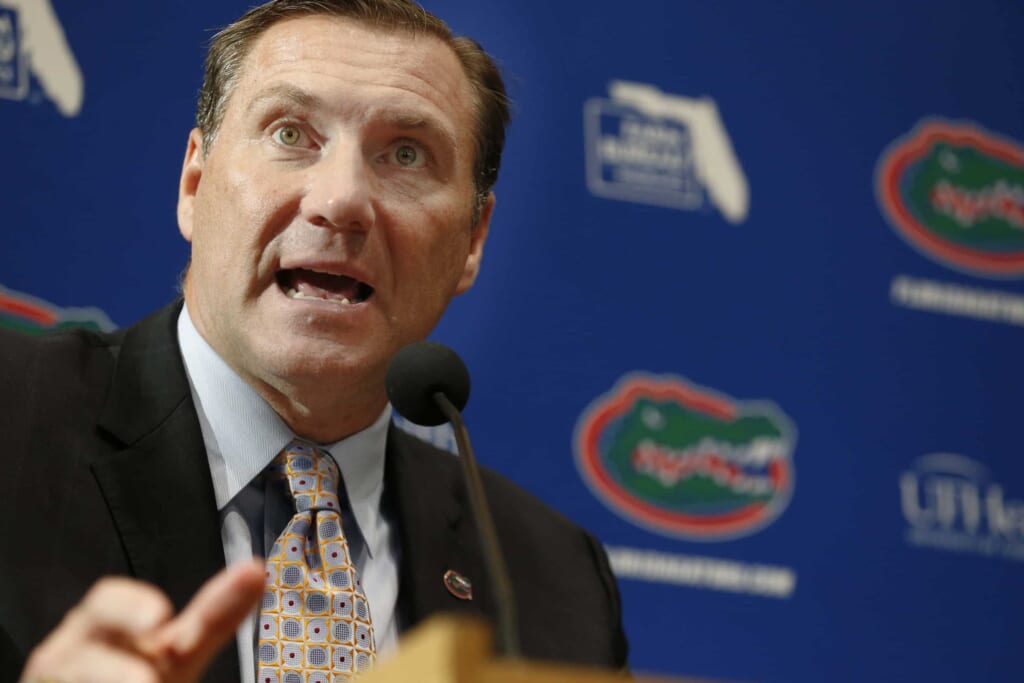 Dan Mullen made Mississippi State into a perennial bowl contender. Considering the context of the situation — fewer resources than its competition and planted in the vaunted SEC West — that was hugely impressive. He consistently closed an obvious talent gap with top-tier preparation in his smashmouth spread attack. Now, Mullen brings that downhill power-running style to a Florida program that desperately needs a jolt offensively. Thanks to the improvements in recruiting and resources, Mullen may soon attract the national recognition he deserves.

“When you have two quarterbacks, you have none.” That’s the rule, but Urban Meyer engineered one of the lone exceptions at Florida in 2006, using Chris Leak and Tim Tebow to win a national championship. Yet that’s simply one bullet point on an impressive career for Meyer, whose power-driven offenses excelled at Bowling Green, Utah and Florida. Although he’s not applauded for being an innovator, Meyer has gleaned and implemented ideas to achieve greatness. That ability to adapt has allowed him to post a career .851 winning percentage, the third-best in history.

A disciple of Mike Leach and the Texas Tech air raid, Lincoln Riley made a name for himself as the offensive coordinator at East Carolina. Between 2010-2014, he assembled two of the most productive seasons in program history — capped by a fifth-place finish nationally in yards per game in 2014. He’s continued that success at Oklahoma, which boasts three straight top-10 rankings. Riley’s first season as head coach included the No. 1 offense in the country. It shouldn’t come as a surprise that nearly the entire NFL has reached out to learn from Riley about his system. 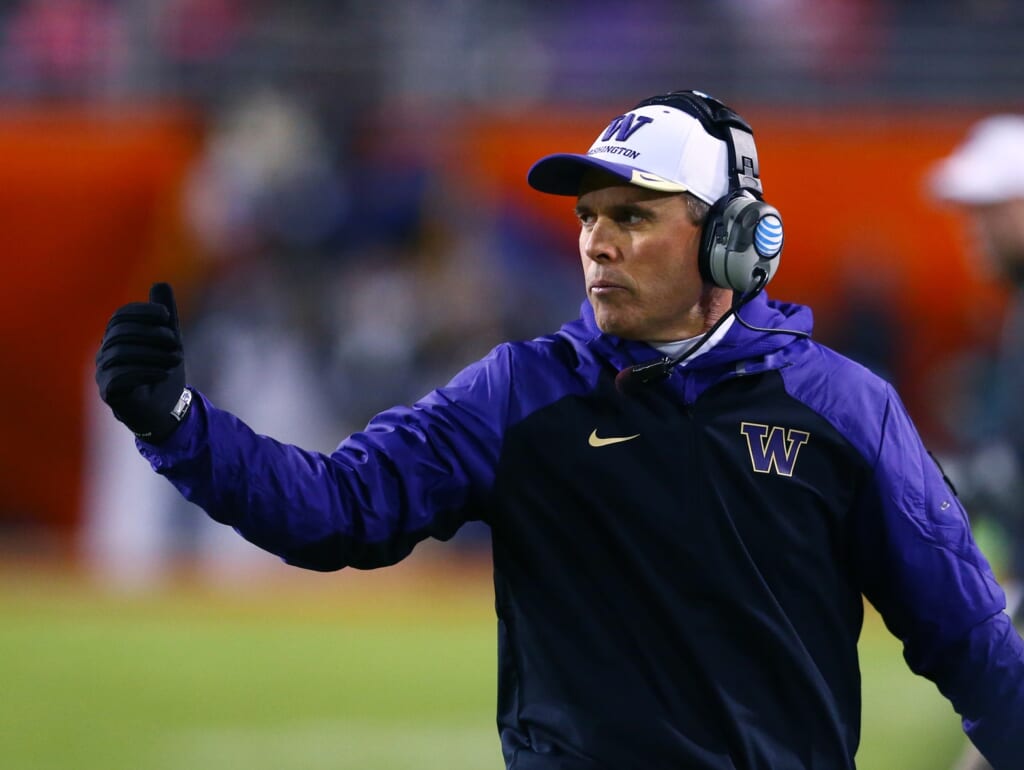 The subtleties of offense are Chris Petersen’s expertise. Among many examples, he displayed this when Washington steamrolled Stanford in 2016. Petersen put a twist on a basic run, making a speed option first appear like a zone read to gain a blocking advantage. And, of course, there was his gall at Boise State to call the “Statue of Liberty” in double overtime to win a bowl game. Simplicity is all the rage these days, but Petersen will out-formation and out-concept opponents into submission. His 129-29 career record is all the proof you need.

Not only does Lane Kiffin know offense, he’ll let you know about it too. In the 2014 SEC Championship Game, for example, Kiffin celebrated a touchdown before the ball had been thrown. He showed off that mental prowess during a three-year image rehabilitation stint at Alabama while tailoring offenses to fit the strengths of Blake Sims, Jake Coker and true freshman Jalen Hurts with immense success. Then, at FAU in 2017, he took an offense that had ranked 71st in yards per play to 11th nationally, helping the program earn an 11-3 record one year after going 3-9.

LaVell Edwards served as the influence of the air raid, which rose to popularity when Mike Leach was the offensive coordinator for Hal Mumme at Iowa Wesleyan. The duo traveled to Valdosta State and Kentucky before Leach’s journey led elsewhere. From 2000-2009, he oversaw an offensive juggernaut at Texas Tech. In his last eight seasons, the Red Raiders finished no lower than sixth in yards per game. Washington State consistently is among the top 25 now. Effective defense has often evaded Leach-coached teams, but there’s simply no questioning the production of his offenses.

Welcome back to the FBS, Chip. Things have changed a little since you left following the 2012 season, mostly that your ideas are everywhere now. Best known for his no-huddle, up-tempo spread, Kelly helped Oregon become a dominant force between 2009-2012. During that stretch, the Ducks posted a 46-7 record and ranked in the top five nationally in yards per game three times. Kelly effectively sparked the current era of offense in college football. Spread out the defense, find your numbers advantage and attack. And quickly do it again.