Rangers trending upward ahead of matchup with Red Wings 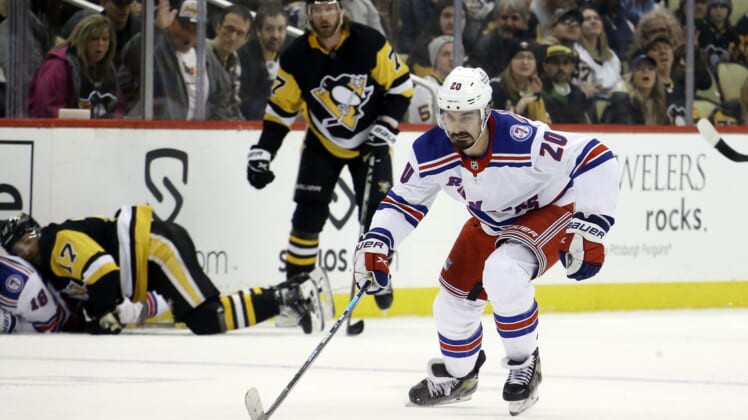 The New York Rangers are up to second place in the Metropolitan Division thanks to their latest hot streak. They will try to keep that trend going when they head to Detroit to face the struggling Red Wings on Wednesday.

The Rangers passed the Penguins in the standings on Tuesday with a 3-2 victory in Pittsburgh. The result was New York’s third straight win and seventh in the past nine games.

New York also recorded a 5-1 home win over the Penguins on Friday, but the rematch was much more dramatic.

Chris Kreider scored a power-play goal early in the third period to give the Rangers a 3-1 lead. Penguins star Sidney Crosby scored on a power play midway through the third, but the Rangers subsequently withstood Pittsburgh’s efforts to get the tying goal.

“You look at the standings and know you are one point behind them with a game in hand. You know it’s a big game coming in here,” Rangers coach Gerard Gallant said postgame. “Just because we beat them in our building pretty good three or four days ago, we knew we were going to be challenged tonight — and we played a real good hockey game.”

New York goaltender Igor Shesterkin made 22 saves on Monday and got plenty of assistance from the back line.

“I thought tonight was the best we moved the puck out of the defensive zone all year,” Gallant said. “Our defense made quick plays up the ice.”

After hovering around the .500 mark in terms of points acquired for a good portion of the season, the Red Wings have nosedived this month. Since an overtime victory over the Carolina Hurricanes on March 1, Detroit has gone 2-8-2.

The latest loss was the Red Wings’ ugliest of the season. Detroit gave up nine goals in the last two periods of an 11-2 clunker at Pittsburgh on Sunday.

“It’s not acceptable,” Red Wings captain Dylan Larkin said. “We really can’t play like that or show up like that the rest of the season here. It’s going to get worse, and we’ll get embarrassed every night.

“We have a couple days to figure it out. We can’t show up like that and not be prepared to have the will to compete and fight back. The emotion wasn’t there, and our compete level wasn’t there.”

Detroit, which carries a three-game losing streak into the Wednesday game, didn’t allow an even-strength goal in a 2-1 overtime loss to the Tampa Bay Lightning on Saturday.

Overall, the Red Wings have been poor defensively, particularly in the second half of the season. They are allowing a league-worst 3.8 goals per game. They have surrendered seven or more goals on nine occasions.

“The focus has been on what we’re going to do to get better, so it doesn’t happen. Something has to give, and it starts with the players — and that’s my message.”

Detroit recorded a 3-2 shootout victory over the Rangers in New York on Feb. 17. Pius Suter had the decisive goal in the sixth round of the shootout.