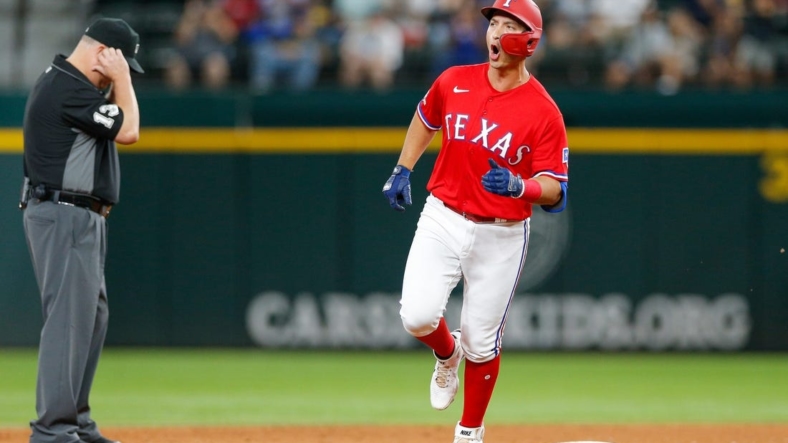 Mark Mathias went 3-for-4 with two runs and two RBI to lift the Texas Rangers to a 7-6 home win over the Detroit Tigers on Friday.

Texas has now won five of its last six games.

Riley Greene hit a home run and a triple, driving in four runs in defeat for the Tigers.

Texas used the long-ball to jump out to an early 4-0 lead.

The first home run came courtesy of Nathaniel Lowe, who blasted a shot to center in the first to give Texas a 1-0 lead.

Then in the second, Ezequiel Duran hit a 3-run home run to left-center to give the Rangers a 4-0 lead.

Detroit answered in the third, cutting the Texas lead to 4-2 on RBI singles by Greene and Harold Castro.

The Rangers took a 5-2 lead in the bottom of the inning on an RBI single by Leody Taveras, and then Mathias hit a 2-run home run to right-center that made it 7-2 Texas.

Detroit cut its deficit to 7-4 in the fifth when Greene drove home Akil Baddoo with an RBI triple, and then scored on a throwing error by Texas second baseman Marcus Semien.

The score remained that way until there was one out in the top of the ninth, when Greene blasted a 2-run home run to right off of Texas reliever Jose Leclerc.

But following a single by Victor Reyes with one out, Leclerc struck out Javy Baez and Castro to end the game.

Lowe, Taveras and Bubba Thompson each had two hits for Texas.

Glenn Otto was the winning pitcher for the Rangers, allowing four runs on five hits in five innings of work.

Tyler Alexander took the loss for the Tigers, allowing all seven runs and eight hits in three innings of work.