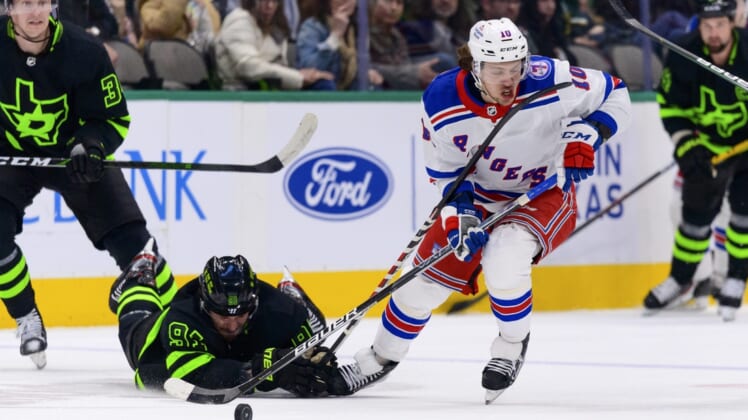 Artemi Panarin scored a goal and collected four assists as the visiting New York Rangers overcame an early two-goal deficit and recorded a 7-4 victory over the Dallas Stars on Saturday night.

Panarin recorded his third career five-point night as the Rangers split a four-game road trip after trailing 2-0 in the first 4:53.

Greg McKegg scored the team’s first goal and Mika Zibanejad scored the game-tying power-play goal for the Rangers, who rebounded after being outscored 11-4 in lopsided losses at Minnesota and St. Louis.

Defenseman Adam Fox scored the tiebreaking goal before Panarin netted his 16th goal. Patrik Nemeth scored what turned out to be the game-winner late in the second period and Barclay Goodrow added an insurance tally in the third.

Ryan Strome capped the comeback with an empty-net goal as the Rangers scored seven goals for the second time this season.

Esa Lindell and Tyler Seguin scored in the first period for Dallas. Jason Robertson scored his 30th goal and Joe Pavelski tallied for the Stars, who allowed more than three goals for the first time in 13 games.

New York’s Igor Shesterkin settled down from the rough start and made 29 saves.

After Lindell beat Shesterkin with a backhander off a sharp angle 49 seconds in and Seguin scored on a deflection, the Rangers dominated the rest of the period by scoring four goals in a span of 5:05.

Seven seconds into a power play, Zibanejad blasted a slap shot from above the left faceoff circle with 7:01 remaining.

New York took the lead with 5:46 left when Fox tipped in a shot by Jacob Trouba. The Rangers extended the lead to 4-2 when Panarin got a drop pass from Miller, fended off defenseman Joel Hanley and lifted a wrist shot from the middle of the left circle into the net.

Robertson’s deflection made it a one-goal game at 7:10 of the second period and New York took a 5-3 lead with 1:40 left when on Nemeth’s backhander on the third effort.

Pavelski got Dallas within 5-4 by putting a deflection over Shesterkin’s glove 8:09 into the third before Goodrow and Strome finished it off.