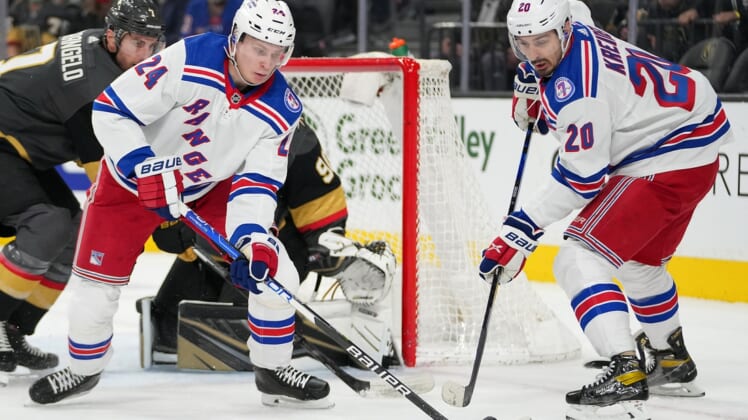 While the New York Rangers endured one of their worst showings of a successful season to date, the Anaheim Ducks were dealing with another alteration of their schedule.

The Rangers are hoping to bounce back from an ugly start to their season-high, five-game road trip Saturday night when they visit the Ducks, who are slated for their first game in four days following another postponement due to COVID-19.

New York saw its three-game winning streak stopped with a 5-1 loss to the Golden Knights. Chris Kreider scored his 21st goal but the Rangers were mostly outplayed as they allowed the final four goals while allowing numerous odd-man rushes.

The Rangers also were held to 11 shots on goal in the final 40 minutes and their 20 shots on goal were their third fewest this season.

“We made a lot of mistakes tonight,” Rangers coach Gerard Gallant said. “The first 25 minutes we played a perfect game plan to come in here and try to beat this hockey team. After that, it fell apart. We started turning those pucks over at the blue lines, we started defending in our ‘D’ zone instead of playing.”

Compounding matters was the absence of leading scorer Artemi Panarin for the third straight game. Panarin was placed in the COVID-19 protocol and was not in Las Vegas but could clear protocol by Saturday’s opening faceoff.

It is unlikely goalie Igor Shesterkin will be available after being placed in the protocol shortly before the opening faceoff Thursday. Shesterkin’s absence means New York’s goaltender tandem will be Keith Kinkaid and Alexandar Georgiev, who allowed five goals Thursday.

The Ducks last played Tuesday when Troy Terry recorded a hat trick in a 4-1 win over the visiting Philadelphia Flyers. Terry’s hat trick halted a four-game skid (0-2-2), but the Ducks saw their game with the Detroit Red Wings postponed Thursday and pushed back to Sunday.

It was Anaheim’s fourth postponement this season and since its last game, center Sam Carrick, right wing Vinni Lettieri along with defenseman Hampus Lindholm and goalie John Gibson entered the protocol. Ryan Getzlaf and Trevor Zegras also were in the protocol Tuesday when the Ducks played without Adam Henrique (lower body) and Max Jones (upper body).

Anaheim reconvened Friday, but only a handful of players participated in practice as the team waited for test results. They were frustrated, with coach Dallas Eakins saying only Carrick is sick.

Zegras has eight goals and 17 assists and is especially frustrated after testing positive Dec. 28 and getting cleared out of the protocol Thursday. He skated with the team but was scheduled to sit Thursday and hopes to play Saturday for the first time since Dec. 17.

“I want to protect the player,” Eakins said of Zegras. “This kid is having a really solid year. He’s a very important piece to our team.”