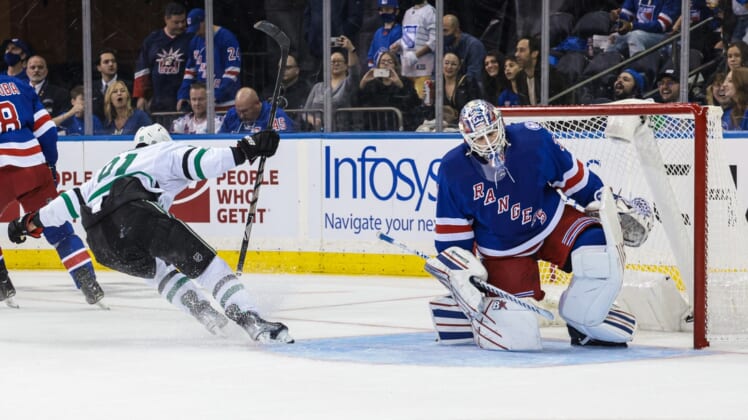 When New York Rangers coach Gerard Gallant pulled Igor Shesterkin on Thursday, it was more about how he felt about the defense in front of his star goaltender.

The shaky defense also was a component of New York’s second straight lopsided road loss to a contending Western Conference team and the Rangers seek a significantly improved showing when they visit the Dallas Stars on Saturday night.

New York opened its four-game road trip with a 4-1 win at Winnipeg on Sunday when it was outshot 46-22 and allowed six power plays. Shesterkin made 45 saves in the victory and got the night off Tuesday when the Rangers endured a 5-2 loss to the Minnesota Wild on Tuesday.

On Thursday, Shesterkin returned but was pulled for the second time in his career during a 6-2 loss to the St. Louis Blues. Shesterkin allowed four goals on 13 shots but when Gallant saw how those goals were occurring, he lifted him.

“You get frustrated and you hope you wake your guys up,” Gallant said. “It didn’t really, but they should be embarrassed a little bit. The way this guy plays for them all year and then they come out tonight and play like that. … After a game in Minnesota that we weren’t too good in.”

The Rangers head to Dallas with four losses in their past seven games (3-4-0) and have been outshot in six straight games and 17 of their past 22 games.

“There’s lessons that can be learned,” New York’s Barclay Goodrow said. “We’re a little — whether it’s lackadaisical or not fully dialed in or we’re making little mistakes in the D zone — and it’s costing us right now.”

Dallas enters Friday with a one-point edge over the Edmonton Oilers for the final wild-card spot in the Western Conference and is 14-5-1 in its past 20 games since dropping three straight Jan. 14-18.

The Stars saw a four-game winning streak halted with a 2-1 loss at Nashville on Tuesday when they just 23 shots on goal. John Klingberg scored 32 seconds into the third period Tuesday but Dallas ended its three-game road trip by allowing two goals off defensive miscues

“Two out of three and we lose the third one by one goal,” Dallas coach Rick Bowness said. “So if we go on any road trip and we win two out of three, we’ll take that.”

The 37-year-old alternate captain leads the team in assists (37) and points (59) through 56 games. He made his fourth career All-Star Game appearance last month.

Dallas played Tuesday’s game without defenseman Miro Heiskanen because of a non-COVID illness and announced Thursday that he was out indefinitely with mononucleosis. He has four goals and 29 points but also leads Dallas in ice time at 24:46 per game and Hesikanen’s absences could mean more prominent roles for other defensemen, such as Klingberg and Esa Lindell

Dallas is also seeking its fourth straight home win and hoping for continued stellar showings from a pair of young players in goalie Jake Oettinger and Jason Robertson.

Despite Tuesday’s loss, Oettinger is 10-3-1 over his past 15 appearances and Jason Robertson has scored 16 of his team-leading 29 goals since Jan. 20, including consecutive hat tricks last week at Winnipeg and Minnesota.

Dallas is 6-2-0 in the past eight meetings, including a 3-2 overtime win in New York in its season opener on Oct. 14 when Heiskanen scored the game-winning goal in overtime.

The teams are meeting in Dallas for the first time since New York’s 4-2 win on March 10, 2020 — two days before the NHL paused for four months due to the COVID-19 pandemic.