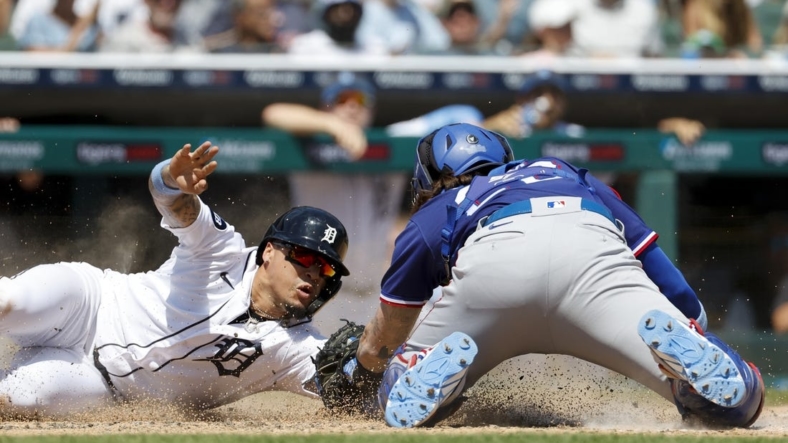 The Texas Rangers rank among the top 10 in the majors in runs and home runs, and they’ve shown a lot of thump over the past week while winning five of their last seven games.

It will be up to the Detroit pitching staff to cool down the Rangers’ bats, as the teams begin a three-game series in Arlington, Texas, on Friday.

The Rangers began the streak by scoring 10 runs against Oakland. They put up seven runs while shutting out Minnesota on Sunday and then truly erupted on Wednesday — they clobbered Colorado 16-4 while pounding out 18 hits, including eight extra-base hits.

Texas had a seven-run, second-inning outburst and added seven runs in the final two innings.

“Good teams score late,” first baseman/designated hitter Nathaniel Lowe said. “It was nice for us to score and kind of put the nail in the coffin there.”

Lowe led the onslaught with three hits, including a home run and triple. He scored three and drove in a career-best five.

“He’s been pretty consistent all year, but as of late, he’s really got it going,” interim manager Tony Beasley said. “He made an adjustment against right-handed pitchers because he was hitting lefties better. He was kind of a reverse-split guy. … I think that’s the thing that’s really allowed him to take off. What he was doing against lefties, now he’s doing against lefties and righties.”

Lowe’s power has been on display in the last seven games. He’s hit four homers and driven in 13 runs.

In his last outing, Otto gave up just an unearned run in 5 2/3 innings at Minnesota on Saturday. He’ll be facing the Tigers for the first time.

Left-hander Tyler Alexander (3-7, 4.03 ERA) will oppose Otto. Alexander snapped a personal four-game losing streak in his last outing, when he held the Los Angeles Angels to three runs in six innings on Saturday.

He’s 0-1 with a 3.86 ERA in three career appearances (two starts) against the Rangers.

Victor Reyes, the Tigers’ hottest hitter, drove in two runs during a six-run, fifth-inning outburst against San Francisco on Wednesday. That’s all the runs Detroit would need in a 6-1 victory, its third in four games.

“I love the work he does,” manager A.J. Hinch said. “He’s a very even-keeled man — doesn’t get too high, doesn’t get too low. And the more he plays, the better he plays.”

The knock on Reyes is that he doesn’t provide much power. He has one homer this season and 14 in 367 career games.

The Tigers, who have scored the fewest runs in the majors, will take production any way they can get it.

“I always feel like good things are going to happen with him,” Hinch said. “He can move the ball forward. He puts it in play hard. He’s not really trying to lift the ball — I know that’s been a knock on him in the past. But he knows who he is and he generally stays around the strike zone, puts the ball in play and makes good things happen.”