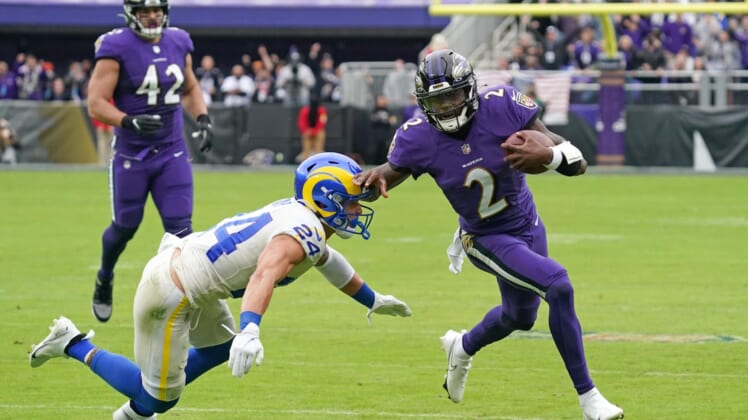 The Los Angeles Rams moved a step closer to an NFC West title Sunday, overcoming miscues, infighting and a desperate opponent to rally for a 20-19 victory Sunday over the host Baltimore Ravens.

Cooper Kupp and Odell Beckham Jr. had TD receptions, with Beckham’s go-ahead score coming with 57 seconds remaining as Los Angeles extended its winning streak to five games. The Rams would clinch a third NFC West title in the past five seasons if the Arizona Cardinals lose to the Dallas Cowboys later Sunday.

Rams quarterback Matthew Stafford was 26-of-35 passing for 309 yards and two touchdowns, but also had two interceptions, one of which was returned for a Ravens touchdown. Stafford also fumbled at the Ravens’ 20-yard line on the Rams’ first possession of the second half.

Kupp had six catches for 95 yards to set the Rams’ franchise record for receiving yards in a season with 1,829. Sony Michel had 74 yards rushing for Los Angeles, including a 1-yard score with 12:09 remaining.

Ravens quarterback Tyler Huntley returned from the reserve-COVID list to go 20 of 32 for 197 yards and an interception as Baltimore lost its fifth consecutive game to put its playoff hopes on life support. Lamar Jackson remains out with an ankle injury that occurred in Week 14.

The Rams had a number of early issues starting on the Ravens’ opening drive when defensive backs Jalen Ramsey and Taylor Rapp got into a skirmish in the huddle.

Los Angeles’ first three possessions ended in a Matt Gay missed field goal and two Stafford interceptions, the first of which was returned for a 17-yard touchdown by the Ravens’ Chuck Clark for a 7-0 lead with 1:58 remaining in the first quarter.

The Ravens were looking to add to a 10-0 lead late in the first half when Huntley was intercepted by Jordan Fuller at the Rams’ 37-yard line. His 34-yard return set up Stafford’s 18-yard TD pass to Kupp, pulling the Rams within 10-7 with 55 seconds to go in the half.

The Ravens’ Justin Tucker added a pair of 46-yard field goals, the first with two seconds remaining in the first half and another with 4:42 remaining in the third quarter, for a 16-7 advantage. Tucker was 4 of 4 on field-goal attempts.

The Rams started their game-winning drive with 4:30 remaining and drove 75 yards in 3:33. Beckham grabbed a 5-yard reception on fourth-and-5 with 1:01 to go, followed by a 7-yarder from Stafford for the game-winning TD.