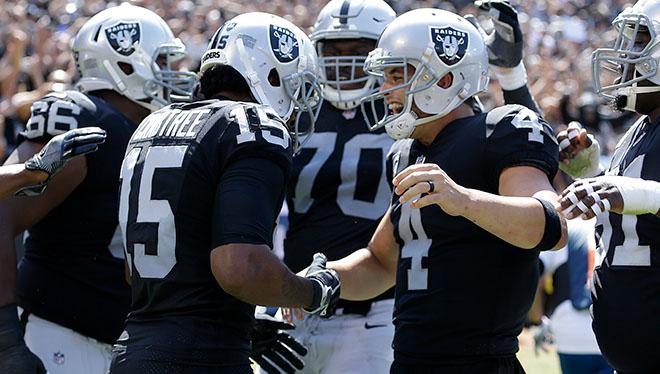 After keeping it close for the first half, the floundering New York Jets couldn’t keep up with the Oakland Raiders high-powered offense, and a young defense which continues to build confidence and make plays. In the end, the Raiders vanquished the visiting Jets 45-20, in front of over 59,000 fans in Oakland.

The homecoming for Marshawn Lynch was also a hit as the bulldozer of a running back scored his first touchdown since 2015, marking his 75th career score. Lynch, who racked up 45 yards on 12 carries, with the one score, played the role he was brought into play. Derek Carr also had a great day finishing 23-of-38 for 230 yards and three touchdowns. Cordarrelle Patterson continues to impress and had a nice break-away TD run in the third quarter.

The offensive star of the game was the Las Vegas Raiders Report “pick to click” for the Jets game – Michael Crabtree. Crabtree scored the hat trick scoring three touchdowns on six receptions for 80 yards. Crabtree started the scoring for the Raiders when he connected with Carr on a 26-yard pass for pay dirt in the first quarter.

The Raiders young defense again showed moxy as they made some significant plays throughout to first half – including an acrobatic pass deflection by rookie Gareon Conley, who played in his first game as a Raider. Jets quarterback Josh McCown challenged Conley early on a sideline bullet to Jermaine Kearse who couldn’t hold on due to the coverage. Conley tried to tip it to teammate Reggie Nelson, but it was not to be.

Khalil Mack may have seemed quiet, but his presence was key as he finished the day with four tackles, two solo, one quarterback sack and one for a loss of yards.

In our view, the turning point in the game after the Raiders failed on a key third and long situation and were forced to punt. The 55-yard punt was high and deep and Jets return man Khalif Raymond muffed it feeling Johnny Holton zeroing in on him. Holton recovered on the Jets 4-yard line and the Raiders punched it in to take a 21-7 lead heading into the break.

The challenge vs. the Jets: again, penalties threatened to derail the high-powered Raiders offense and also stifle the defense. While a few calls were questionable, the Raiders still need to work on play discipline so they don’t hurt themselves in key situations during the season. Nine penalties for 79 yards is not acceptable moving forward. The Raiders are too talented a group to rack up those kinds of numbers.

The Raiders are 2-0 to start the season for the first time since 2002 – the last time the Silver and Black played in the Super Bowl. Let’s hope that’s a good omen.