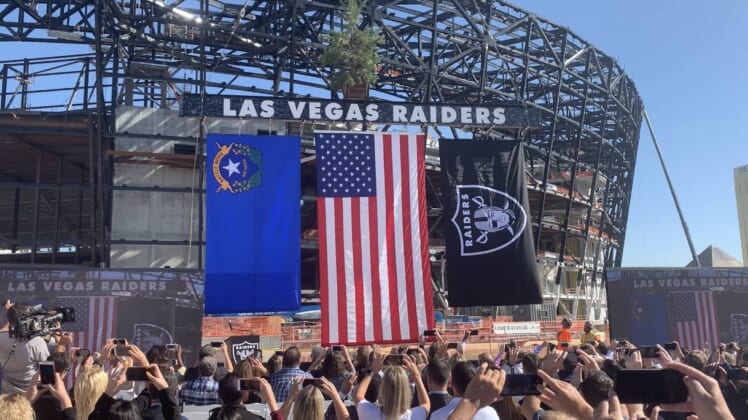 As part of the ceremonial topping out ceremony, the Raiders and the Las Vegas-based airline announced naming rights agreement.

It was another big milestone in the building of the Raiders new $1.8 billion stadium on Monday when team owner Mark Davis signed the last steel beam before it was hoisted to the top of the massive structure marking the projects ceremonial topping out.

In front of a crowd of stadium construction workers, team officials, and local dignitaries, the ceremony was dominated by the news the stadium now had a name – Allegiant Stadium.

“I was excited about it (Allegiant) because I wanted it to be a local company,” team president Marc Badain said. “As we got further into discussions with Maury (Gallagher – CEO of Allegiant) and his team, the fit was just right. Las Vegas is a destination and Allegiant is a company build on building travel to destinations so the fit made sense.”

Although terms of the deal were not released Monday, recent media reports say the airline will pay $25-30 million per year for the naming rights. The eight months of discussions came to fruition with the announcement today.

Badain also said the stadium stands at about 60-percent complete and is on schedule to reach completion on July 31, 2020.

The next challenge and milestone for the project will be the installation of the translucent polymer roof and it’s complex cable system. That process will begin soon.