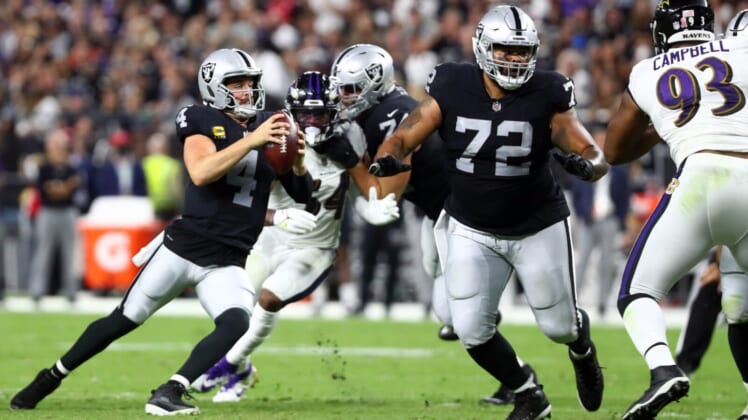 Ultimately, it was a test for the Raiders offensive line and the leader of the offense — quarterback Derek Carr.

“Playing a defense like this and a superstar like Lamar (Jackson), you know it’s going to be a tough fight,” Carr said after the Raiders’ 33-27 overtime victory. “This defense – every time I play them – it’s hard to get one first down.”

Even though the Ravens (0-1) were without cornerback Marcus Peters, who suffered a torn ACL on Thursday, the Raiders (1-0) were still going up against a stifling defense.  And, in a thrilling 33-27 overtime win, the Raiders offensive line proved it’s got some work to do but still kept their quarterback clean, giving him time to lead them on a game-winning drive.

Things did not look good early for the Raiders offensive line when right guard Denzelle Good went down with an apparent injury on the team’s first drive. Fortunately, he returned to the game a few plays later.

The offensive line only allowed three sacks, the same number for the Ravens offensive line. The worst of the sacks came when the Raiders offensive line big acquisition in rookie right tackle Alex Leatherwood lost his one-on-one matchup and could not move his feet in time to protect Carr.

In addition, the rookie right tackle was tagged with a false start penalty at one of the most critical moments in the game after Carr found wide receiver Bryan Edwards and ended up at the 1-yard line in overtime, bringing the Silver and Black back to the 6-yard line, which ultimately led to an interception in the end zone.

Despite these small mistakes from the offensive line, the eighth-year play-caller said he has adjusted to playing with all types of players, both veterans, rookies and those in between.

“There were a couple of times, a couple calls that we’re going to take a look at. We could’ve been better, but I can communicate better. I can help those young guys out. At this point in my career, I can do a better job of helping them and play better for us. I thought they did a great job all day. There was only a couple calls on a few things, a couple of checks, which is hard playing this team.”

Carr, who completed 34-of-56 of his passes for 435 yards, said the Raiders offensive line coach Tom Cable and the offensive line room need credit for being ready to take on the Ravens.

“To handle what we just had to go through, you have to tip your hat to Coach Cable and the players, the work ethic that they work really hard at studying and preparing because late in games, we called them to be one-on-one,” Carr said. “We trusted them and they came through for us.”

The 435 air yards for Carr were the most passing yards allowed by the Ravens since Week 4 from the 2019 season against the Cleveland Browns, which shows Carr had time in the pocket and received protection from the Raiders offensive line.

Although the Raiders had 56 pass attempts, the Silver and Black rushing unit combined for 21 carries for 82 yards.

Despite running back Josh Jacobs limping off the field numerous times after plays, his time on the gridiron was beneficial, rushing 10 times for 34 yards and two touchdowns, one from 15 yards out and the other from two yards.

Jacobs’ 15-yard touchdown run was helped by blocking center Andre James before weaving his way into the endzone to tie things up at 17-17 with 9:18 left in the fourth quarter.

“Against that defensive front, the young guys, I think, there were a couple of mishaps that they had, but for an overall standpoint, for the first game of Andre’s first game and Leatherwood’s first game – starting – I think it was definitely huge,” Jacobs said.

A little more than one-third of the team’s yards gained on the ground came on the fourth play of the Raiders’ first drive from backup quarterback Marcus Mariota on a perfectly executed run-pass option play.

Mariota faked the handoff left and found an opening on the right side of the pocket for a 31-yard gain on third-and-1.

Despite having one less day to prepare, the Raiders will head to Heinz Field next week and take on the Pittsburgh Steelers for a second straight AFC North opponent on Sept. 19 at 10:00 a.m.