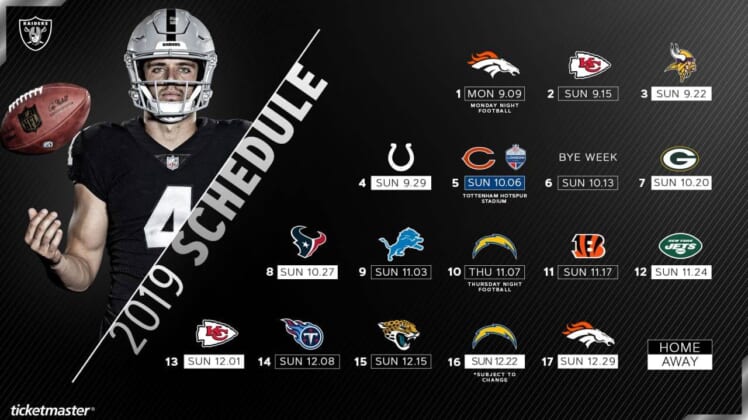 Oakland will spend five weeks straight on the road including a “home” game in London all in October.

Heading into 2019, Jon Gruden and the Raiders faced playing the toughest schedule in the NFL. Coming off a 4-12 season, that seems unfair but after Wednesday’s season schedule release, the battle to improve on their 2018 record is more challenging than ever

Oakland faces teams with an average winning percentage of .530 and faces a downright brutal stretch after their Sept. 15 home game against hated rival Kansas City. After that home game, the Raiders will not play another game until Nov. 3.

That’s not a typo.

Even if the Raiders execute well and draft their stars of the future, the schedule – especially early – may mean a sputtering start as they attempt to get the franchise on the field back on track.

In our view, it’s moot to make predictions on the game when we’re not yet clear on what the Raiders roster looks like for 2019. But with lots of needs and unknowns, it certainly doesn’t look great.

After opening up the season at home on Monday Night Football against AFC West foe Denver, the raiders then host another division rival in the Chiefs in Week 2. After that, the Raiders play five weeks in a row on the road, including their alleged home game against the Bears in London, before returning to Oakland on Nov. 3 to face the Lions. That’s a span of 49 days in between home games.

In what many Raiders fans are seeing a slap in the face, the team will also play its last game as the Oakland Raiders on Dec. 15 against the Jaguars, instead of the last game of the season.

Although team officials wouldn’t comment officially, it is believed the “unfair” schedule was due in part to the late resolution on where the team would call home in 2019. Insiders say the NFL had to move forward and made the choice to schedule as many games away from the Raiders home as possible.

While it will make the drive to return to the playoffs more difficult, it’s yet another strange and unavoidable bump in the road as the Raiders prepare to move to Las Vegas in 2020.