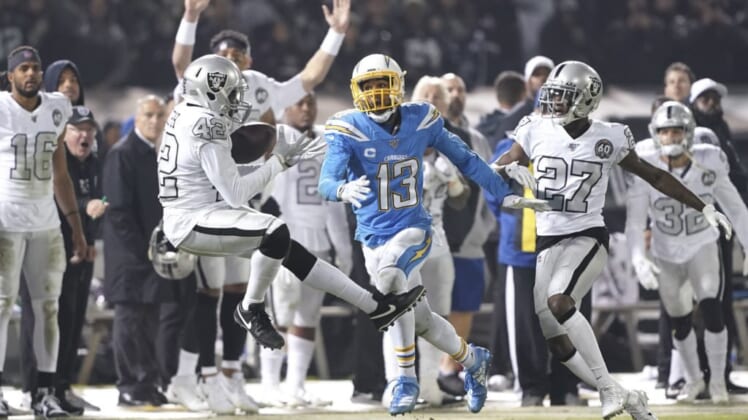 On a night when Derek Carr and the Oakland offense were not firing on all cylinders, the young and resilient defense makes a statement in the 26-24 win.

This story originally appeared on CBSSportRadio1140.radio.com.

As the Raiders prepared for their big game against AFC West division rival the Los Angeles Chargers on Thursday night, most expected a good, old fashioned, high-scoring division affair. After all, these teams have been rivals since 1960 and the American Football League days.

Instead, what fans and a national audience on Thursday Night Football watched was what Oakland quarterback Derek Carr referred to as a “bloodbath.”

“That was an old-school, AFC bloodbath basically,” Carr said after the game. “Just two defenses playing out of their mind, and we just found a way to win, you know?”

In fact, what many thought would be a high-scoring game turned into the opposite – two offenses unable to move the ball much and the Chargers the victims of a Raiders defense playing out of its mind.

The Raiders finished the night with under 300 yards in offense (278) and the Chargers barely getting there (315). Los Angeles quarterback Philip Rivers, known to put up big days and numbers against the Raiders, finished with a 57.5 quarterback rating going 17-of-31 for 207 yards, two touchdowns, and three costly interceptions.

Oakland’s offense didn’t turn the ball over like the Chargers, but it still sputtered most of the contest. The Raiders had the ball six times in the second half and scored 10 points – including the game-winning drive capped by a Josh Jacobs 18-yard touchdown. The lack of ability to move the ball on offense put the pressure on the Raiders defense to play well all four quarters, and they did. They might have bent, but they didn’t break.

Erik Harris, who had a career-high two interceptions in the game, talked with the NFL Network after the game about his defense and their ability to prepare on a short week for such a big game.

“It’s a great feeling,” Harris said. “On a short week, credit to our coaches for getting us the game plan and preparing. I know they didn’t get a lot of sleep this week.”

That’s what playoff teams do in the NFL – they pick each other up on each side of the ball when a unit isn’t playing as it should. Last week, the Raiders offense shined as did Carr. This week, not as much.

Rookie of the year candidate Jacobs said after the game, the pieces for the young Raiders are starting to fall into place.

“This team is a lot better than we get credit for,” Jacobs told reporters after the game. ‘And I think you see that now. I mean, we’re starting to put the pieces together. So it’s gonna be fun and interesting to see how we go on this little stretch and see how we do next week.”

The Raiders have a strong chance to return home in three weeks with a 7-4 record. They host winless Cincinnatti (0-8) next Sunday before traveling to New Jersey to take on the New York Jets (1-7).

“I’m proud of this team,” Gruden said after the game. “Defensively we got some really good play from all three levels, (linebacker Tahir) Whitehead was all over the field, Cle Ferrell and the pass rush showed up, and you can’t say enough about Erik Harris and the secondary.”

The Raiders are alive and well in the AFC Wild Card playoff race but trail both Indianapolis (5-3) and the Buffalo Bills (6-2) as it stands today.

The resiliency of this young Raiders squad is not only winning games in 2019, but it’s building a strong foundation for a winning tradition when the team arrives in its new home – Las Vegas – in a few short months.