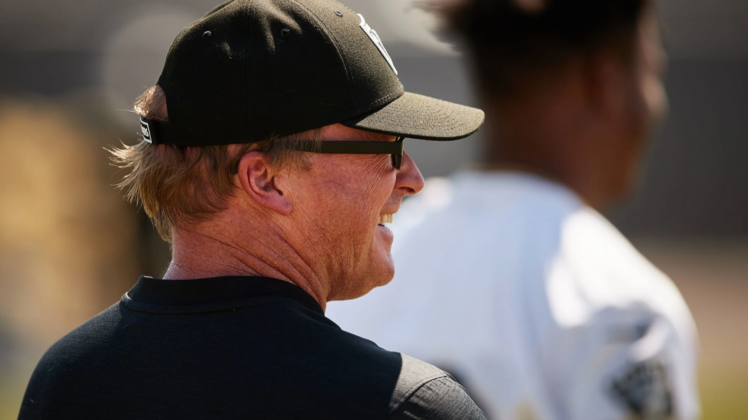 The Las Vegas Raiders, coming off an emotional win on Monday night, now fly all the way to Pittsburgh to take on the Steelers tomorrow at 10 am PT. Raiders coach Jon Gruden addressed the team’s rash of injuries and what he thinks of his patch-work offensive line.

The Friday injury report is out and a whopping 16 Raiders were on the team’s list.

Defensive end Yannick Ngakoue, who has a hamstring injury, was limited in practice, but head coach Jon Gruden said the 6-foot-2 defensive end will play on Sunday.

On Monday, Ngakoue recorded five tackles and a quarterback hit, including a pass deflection while playing 33 snaps.

Despite suffering the hamstring injury and trying to come back on a short week, Gruden appreciates when his players, such as Ngakoue, are able to do anything they can to get on the field for the next game.

“He’s one of our tough players, he’s a team captain almost unanimously selected,” Gruden said of Ngakoue. “It says a lot, but he wants to win. He knows we got to have him to win. I admire these players that go to extreme measures to do what they have to do get ready to play – mentally and physically – and he’s at the top of the chart when it comes to that.”

On the other side of the ball last week, running back Josh Jacobs scored two touchdowns but came to the sidelines limping numerous times.

This week, he’s on the injury report and Raiders coach Jon Gruden said Jacobs will not play against the Steelers.

Taking the lead back duties is Kenyan Drake and behind him will be Peyton Barber, who the Silver and Black signed a couple of weeks ago.

“It’s an opportunity for Peyton Barber,” Raiders coach Jon Gruden said. “We really like Barber. We think he’s a heck of a back. Coming from Tampa, I’ve had a chance to really get behind the scenes on him and I like the way he runs, catches and picks up blitzes. Kenyan will continue to play a role in our system, no matter who the other back is, and we’re excited about this opportunity to see what we’re having.”

In 2020, the 27-year-old running back competed in all 16 games and recorded 94 carries for 258 yards and four touchdowns in a system where he was the third rusher behind Antonio Gibson and J.D. McKissic.

Right guard Jermaine Eluemunor, the native of the UK, filled in for Denzelle Good after suffering a season-ending torn ACL last week and did yeoman’s work.

Raiders coach Jon Gruden said the 26-year-old did not lose a beat when he appeared in last week’s victory.

“Very professionally guy,” Gruden said “He’s taking advantage of this opportunity. He wasn’t in awe going in there. He’s been in there before. He’s played for New England, Baltimore, I think he has a high expectation of his abilities and hopefully he continues to get better within our system.”

Next to Eluemunor on his right side of the offensive line is rookie right tackle, Alex Leatherwood.

The second-time Raiders head coach said those two have knowledge far beyond the gridiron but has adapted and learned what it takes in the Silver and Black.

“Well, he’s going to get quite a fan base,” Gruden said of Eluemunor. “He’s a real interesting person. We have a right tackle, that I think the man he wanted to have dinner with if he could meet anyone was Socrates. So, Leatherwood is a deep, philosophical cat. Now we have this Elumenor, who comes from abroad. He’s played soccer, he’s worldly and he’s very intelligent, and I’m not.

“It’s really cool to be around these two guys, how quickly they’ve learned our system and how they’ve enjoyed competing and playing football.”

Leatherwood and Eluemunor are two of the four new offensive linemen for the Raiders getting set to take on the Steelers on Sunday.

Raiders coach Jon Gruden said preparations have taken place with a bang as the Silver and Black look to cut down their mistakes.

“We know it’s going to be loud,” Gruden said. “Hopefully we’re ready for it. We practiced in the noise all week and I know this: we have to eliminate the false starts and pre-snap penalties. I don’t care if we’re playing at home or away. That was ridiculous last week. We’ve got to play better.”

The Raiders are 5.5 point underdogs vs. the Steelers.