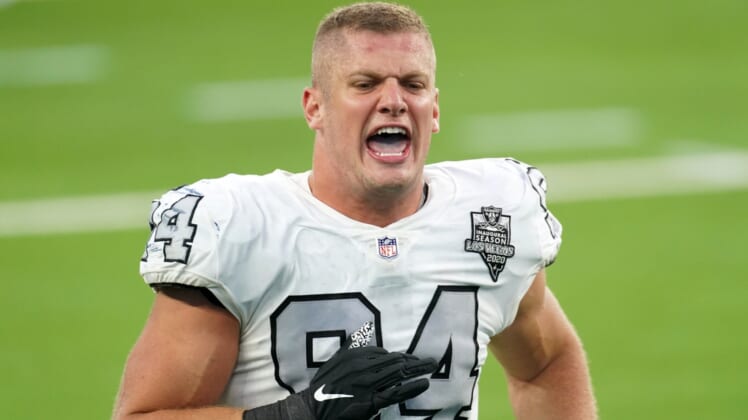 He made his proclamation in a video posted to Instagram.

“I’m at my house here in West Chester, Pennsylvania,” Nassib, 28, said. “I just wanted to take a quick moment to say that I’m gay. I’ve been meaning to do this for a while now but finally feel comfortable enough to get it off my chest. I really have the best life, I’ve got the best family, friends and job a guy can ask for.

“I’m a pretty private person so I hope you guys know that I’m really not doing this for attention. I just think that representation and visibility are so important. I actually hope that like one day, videos like this and the whole coming out process are not necessary, but until then I am gonna do my best and do my part to cultivate a culture that’s accepting, that’s compassionate.”

Raiders owner Mark Davis said to the Las Vegas Review-Journal, “These are personal decisions. It’s 2021, and he’s a Raider. If he’s happy, I’m happy. It takes courage. I thought we got to the point where this wasn’t (a prominent news story). It doesn’t change my opinion of him as a man or as a Raider.”

NFL commissioner Roger Goodell said in a statement, “The NFL family is proud of Carl for courageously sharing his truth today. Representation matters. We share his hope that someday soon statements like his will no longer be newsworthy as we march toward full equality for the LGBTQ+ community. We wish Carl the best of luck this coming season.”

Nassib is on track to become the first openly gay player to play in a regular-season game. Defensive end Michael Sam came out as gay in 2014 before the St. Louis Rams drafted him, but he did not make the final roster. 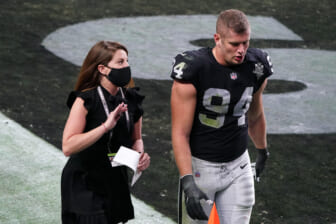 Nassib also announced a $100,000 donation to the Trevor Project, which works to prevent suicides among LGBTQ+ youth in America.