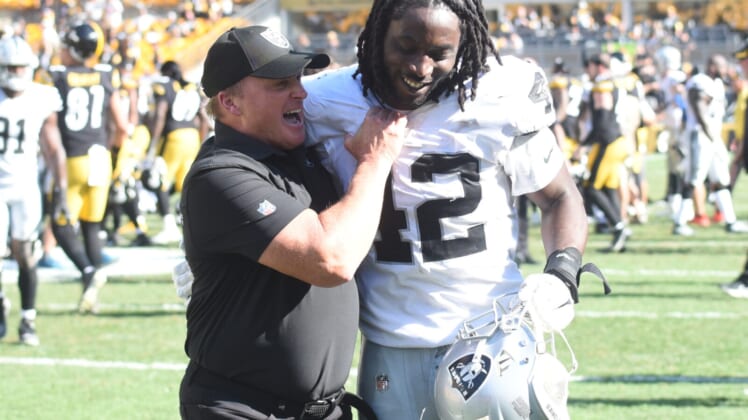 The Las Vegas Raiders 3-0 record heading into Week 4 has put fans on a rollercoaster far more entertaining than any ride at an amusement park.

As one of five teams with a flawless September, the Raiders had to climb out of two 14-point deficits for overtime wins in both home games. Last Sunday, Vegas needed the entire extra period to seal the deal against the Miami Dolphins.

As head coach Jon Gruden said at the podium Monday, he’s not going to apologize for how his team wins games—nor should anyone in that locker room. For the first time since 2002, the Raiders have started the season with three consecutive wins. If you look back in history, that campaign concluded with a trip to the Super Bowl, but we won’t get too far ahead of ourselves.

The Raiders have bought into a grounded mindset in a long season with 17 games, so let’s look at what they’ve accomplished so far despite some glaring issues.

Based on the Raiders’ weaknesses and where they stack up in some statistical categories, the Raiders 3-0 record would surprise anyone who hasn’t watched the games.

The Raiders’ revamped offensive line has had some solid stretches against formidable defenses, but the unit still needs to show significant improvement.

Coming out of Alabama, Leatherwood had some issues against powerful pass-rushers with a strong bulrush. On multiple occasions, edge-rushers have bulldozed through him to apply pressure or record a sack. Even with his lapses in pass protection, he’s a solid run-blocker who’s only played in three games. Don’t panic yet, the athletic tackle has room for growth.

Along with high snaps, James has some concerning tape where he’s unable to hold his center of gravity. He’s also committed four penalties. The Raiders obviously believe in him; they signed the 24-year-old to a two-year, $8.65 million extension this past offseason. With only four starts under his belt, the third-year pro also has room to develop into a decent starter.

Despite the gaudy offensive numbers and the Raiders 3-0 start, Las Vegas continue to struggle in the red zone, converting seven of 13 trips into touchdown drives (53.8 percent), which ranks 21st league-wide.

Perhaps running back Josh Jacobs’ eventual return helps the offense to convert more trips inside the 20-yard line into six points. Remember, he scored twice on the ground within 15 yards of the goal line against the Baltimore Ravens in Week 1.

Along with the New York Giants, Vegas has committed the fourth-most penalties and lost the fifth-most yards for those infractions. As shown above, starting offensive linemen have been the culprits for 11 penalties in total.

If the Raiders’ five-man group in the trenches shows moderate improvement, we could see this team put together complete four-quarter performances.

Even with the Raiders glaring issues, how have they been able to pull themselves out of early holes against the Ravens and Dolphins and maintain a lead on the Pittsburgh Steelers for most of the game?

Derek Carr’s early MVP buzz is real. Yes, his passing yard totals are a little inflated because of two overtime periods, but his command of the offense and aggressiveness has reached a new level. This is a key reason for the Raiders 3-0 record.

Carr has always spread the ball around, but now he’s doing it and finding his pass-catchers for chunk plays. Wide receivers Henry Ruggs III and Bryan Edwards average 21.5 and 21 yards per reception, respectively.

When Ruggs and Edwards go downfield, defenses must respect Carr’s deep ball more than they have in the past because of his willingness to go for the home run play.

So, when someone tells you Carr’s play hasn’t changed, show them his intended air yards this year compared to previous seasons. Clearly, he’s been far more aggressive through the first three games in 2021. Perhaps the young wideouts have earned his trust and the chemistry has clicked in a second season as teammates.

Even with shaky pass protection, Carr’s confidence hasn’t wavered, and that’s put the Raiders in a position to win games in dramatic fashion.

Raiders defense gets off the field on 3rd downs

Gus Bradley turned an incredibly talented defensive unit in need of new direction into a technically sound group. He and his group certainly deserve praise for the Raiders 3-0 record.

Last year, the Raiders defense had several communication lapses with defenders out of position and seemingly undisciplined in their assignments. Through September, all three levels of the defense played with cohesiveness and swarmed to the football with urgency. Opposing quarterbacks have to pass through tight windows for completions. Running backs and wide receivers don’t have much room to create after the catch or in space.

Not only do the Raiders have a ferocious pass rush that’s recorded the fourth-most quarterback pressures (37), the defense kills drives on third downs.

Vegas ranks sixth in third-down conversions allowed. The unit doesn’t give opposing teams extra possessions, which means less margin for error. And once the ball goes back to the offense, the Raiders have usually come away with points. They’ve done so on 48.6 percent of their drives, which ranks 6th across the league.

Even with the Raiders 3-0 record, the team isn’t without flaws, but that’s fine because they’ve played complementary football.

All along, the defense has given the offense more scoring opportunities. Carr has performed at a peak level in crucial situations. Gruden rediscovered the ground attack with running back Peyton Barber, who rushed for a career-high 111 yards in the last outing.

Yet to play a complete game, the Raiders could put it all together in an AFC West showdown against the Los Angeles Chargers in Week 4. If they do, that matchup could serve as the winning template for the remainder of the season.