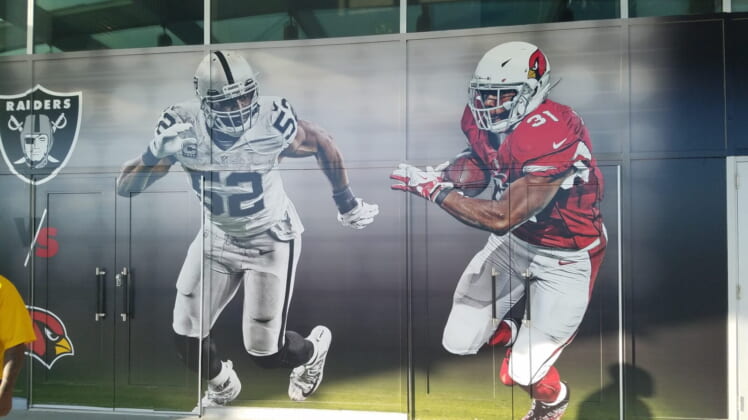 NFL Preseason Week 1 might be one of the hardest things to truly describe. But let’s a take a shot using a comparison system.

In the heat of the Arizona desert the Raiders looked flat early and never seemed to put together a complete drive. Even on the touchdown scoring drive, Oakland was gifted the majority of the yards on a 5-play, 63-yard drive. First the Cardinals defense was embarrassed for 29 yards on a screen pass on 3-and-12, followed by a 24-yard reverse by Jaydon Mickens (with another five due to penalty), then a pass interference call placing the Raiders on the 1, for the eventual TD plunge from John Crockett.

I liked Mickens, he seemed to be ready to play, made some nice plays using his speed and showing a little toughness on the reverse, my favorite offensive play of the game, lowering his shoulder at 5-11, 170lbs, will standout to coaches.

Moving along, I was completely unimpressed with Connor Cook, while I thought E.J. Manuel looked far superior between the two QBs. Cook’s ceiling feels like a 6-year backup in the NFL. For all of Manuel’s flaws he can drive the ball downfield, he can take a hit and has some nice athletic ability. My money would be on the Raiders hoping Manuel wins this job.

By the way, why are these coaches so conservative in meaningless games? I swear out of the 65 passes attempted, 75% of them seemed to be 2-yard routes. Brutality that only a game featuring Blaine Gabbert could achieve. Gabbert was sacked four times and completed five passes, I will give him this he is consistent.

Back to the Raider Nation side of the ball, LaTroy Lewis, rookie linebacker out of Tennessee really impressed with his edge rushing, getting two sacks and would have had three if not for holding on LT Will Holden. NFL squads can never have too many pass rushers and he was at least a nice bright spot on a dull night off football.

The one real positive from the game?

It wasn’t this one.