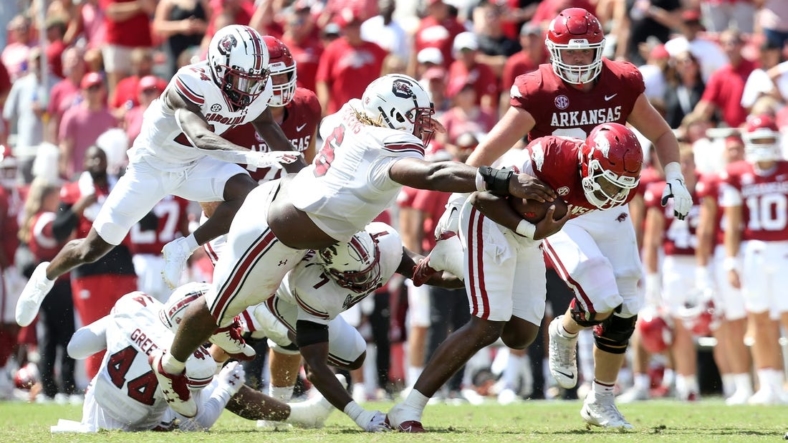 Raheim Sanders rushed 24 times for a game-high 156 yards and two touchdowns as No. 16 Arkansas opened Southeastern Conference play with a 44-30 victory over South Carolina Saturday afternoon in Fayetteville, Ark.

Arkansas snapped a three-game losing streak against the Gamecocks (1-1, 0-1) and moved to 14-10 in the series.

Oklahoma Sooners transfer Spencer Rattler was 23-for-38 for 371 yards with a touchdown and an interception in his second outing for South Carolina.

MarShawn Lloyd rushed for a score, but his fumble that was recovered by Arkansas’ Hudson Clark ended a drive after Jefferson’s TD run. Juju McDowell and Jaheim Bell added TDs on the ground.

Antwane Wells Jr. caught eight passes for a game-best 185 yards and a TD.

In the squads’ first meeting since 2017 in South Carolina, the Razorbacks gambled on their first possession, with Jefferson converting a fourth-and-inches sneak. Two snaps later, Sanders roared in for a 7-0 lead at 6:42.

On the ensuing drive, Lloyd’s 43-yard reception on a screen pass set up Mitch Jeter’s field goal from 28 yards.

But Sanders capped a 12-play drive with a scamper for 11 yards just 32 seconds into the second quarter. Dubinion’s scoring run ended a second straight drive of 12 plays and put the home side up 21-3 at 8:13.

Lloyd scored from seven yards on a run, but Jeter missed the extra point wide left after a bad snap to leave it 21-9 at halftime.

On a third-and-17 midway through the third, the visitors slashed the deficit to one score when Rattler found Wells wide open for 62 yards to make it 21-16.