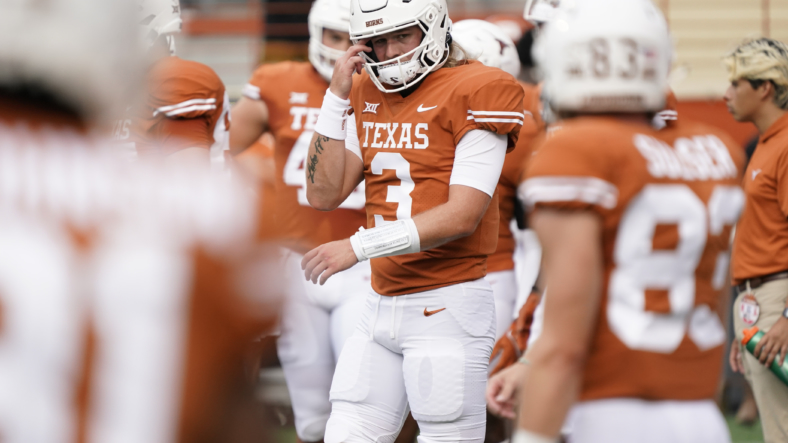 The Texas Longhorns are taking on one of college football’s finest teams on Saturday as they battle Nick Saban’s Alabama Crimson Tide. Despite entering the game as 21.5-point underdogs, Longhorns were showing they were ready to take on the No. 1 ranked team in the nation. Their early success was mainly thanks to quarterback Quinn Ewers and his consistent ability to connect downfield with sophomore receiver Xavier Worthy.

One of the top-ranked high school quarterback recruits, Ewers is a highly touted redshirt freshman who won the starting Texas QB gig over sophomore Hudson Card this season.

Ewers started the game strong, connecting on 9-of-12 passes for 134 yards to keep the score close with the Crimson Tide leading 10-7 in the first quarter. All his momentum would then come to a screeching halt when he was met by 6-foot-4, 240-pound linebacker Dallas Turner as he released the ball. Ewers tried to brace himself as he fell to the ground, but the force of the hit may have already caused the damage.

The Texas QB had to leave the field with what appears to be a non-throwing shoulder injury. It was later revealed to be a sprained clavicle, according to Texas coach Steve Sarkisian. Card relieved him right away, and the Longhorns would later kick a field goal to tie the game at 10 points apiece.

Texas Longhorns have no chance without Quinn Ewers vs Alabama

The only reason the Longhorns were able to get off to such a strong start against one of the best, if not the best teams in the nation, is due to Ewers and the Texas offense punching them in the mouth right away. As well as Ewers was performing, and even with Bijan Robinson potentially being the top running back in college football, Bryce Young is still on the opposing sideline. The Crimson Tide are loaded with future NFL talent at nearly every position.

Texas may be holding on for now, but unless Ewers can stroll back on the field, they won’t be able to go round-for-round all day. For now, Ewers is being evaluated by the medical team back in the locker room at DKR Texas Memorial Stadium, but hopefully the 19-year-old QB isn’t sidelined for long. We’ll keep you updated on his status once updates are revealed.