Baker, 68, is stepping down effective immediately to return to his home, family and business projects in California and Nevada.

“I have come to the conclusion that it is time for someone else to have the ‘best job in the world’ so I can still do a few more exciting things in my professional life while also returning home to our four children, 10 grandchildren and soon-to-be great grandson in Orange County, California, who I’ve missed so much during my tenure at ‘The Most Inspiring Place on Earth,'” Baker said in a news release.

Baker has turned over the day-to-day operations but will continue to represent the Hall of Fame at ceremonies at NFL stadiums across the country honoring the members of the Centennial Class of 2020 and the Class of 2021. 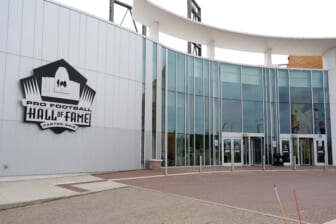 NFL commissioner Roger Goodell praised Baker, who took over in January 2014, for expanding “the Hall’s brand nationally and footprint locally in Canton, Ohio.”

“His mission to honor and support the heroes of the game will be one of his most lasting and important legacies,” Goodell said. “We are grateful for David’s many contributions and extend our utmost thanks and best wishes to Colleen and him.”

Jim Porter, 57, has been named as the new president. He previously served as the Hall of Fame’s chief marketing and communications officer.