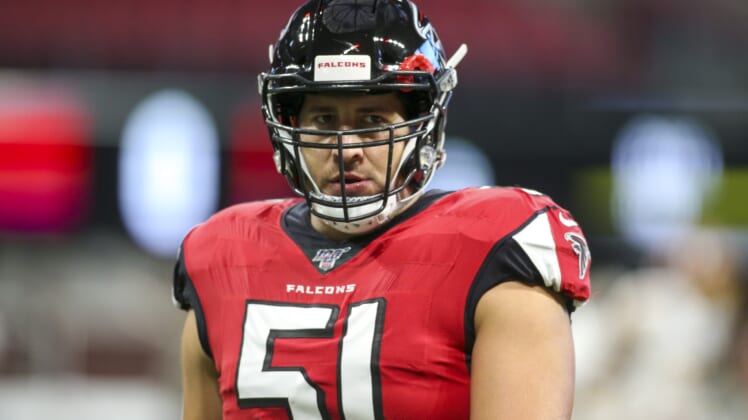 The San Francisco 49ers have now made two huge moves on their offensive line in free agency after acquiring Alex Mack on the open market.

Mack is a six-time Pro Bowler who is reuniting with 49ers head coach Kyle Shanahan after spending time with him as a member of the Cleveland Browns and Atlanta Falcons.

Details of Mack’s detail aren’t available at this time, but it stands to reason he earned a decent, short-term payday from the 49ers.

With the restricted NFL salary cap, though, Mack probably took a little less to be with Shanahan in the Bay Area — at least when it comes to his 2021 cap hit.

Even though the Niners finished with the ninth-best offensive line last season by Pro Football Focus’ data, the interior was still an area of need. Williams was PFF’s No. 1 tackle in all of football and earned a record new contract as a result, but beyond him and Mike McGlinchey, there was plenty of uncertainty in the offensive trenches.

Former starting center Weston Richburg missed all of 2020 due to injury, and per Rapoport, underwent hip surgery in early March or thereabouts. That created a legitimate void for Mack to fill, and for his part, the 35-year-old has gone from a rebuilding team in Atlanta to a potential contender in San Francisco.

Durability is one of Mack’s signature traits as a player. He appeared in 14 of 16 games during the 2020 campaign, which marked only the second time that the 2009 first-round pick had not made it through the full 16-game schedule in a season.

Given that Williams and Mack agreed to sign on the dotted line right around the same time, it stands to reason Shanahan and 49ers general manager John Lynch sold them on their vision for the offense. What exactly does that vision entail given the uncertainty around the quarterback position?

Jimmy Garoppolo is far from a lock to be the team’s starting signal-caller in 2021, so taking big swings for veterans like Williams and Mack could be the precursor to a massive move that gives the Niners an upgrade at the most important position.

The last time Jimmy G was fully healthy, though, he led San Francisco to a Super Bowl appearance as he thrived throughout the 2019 season. It’ll be fascinating to see what the organization decides to do from here.

For now, Alex Mack is a phenomenal addition to the starting lineup and the locker room.