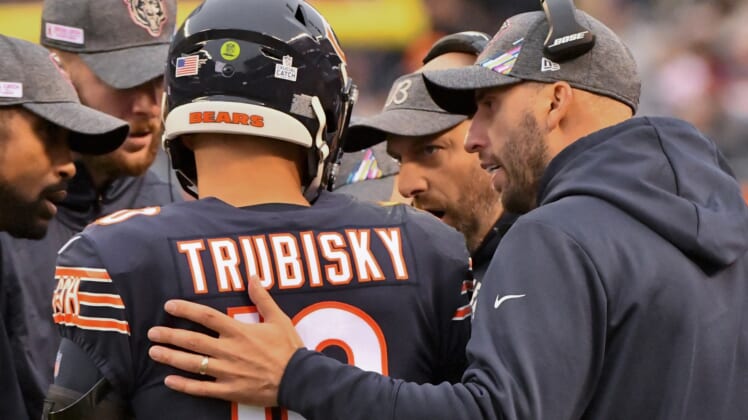 San Francisco 49ers rumors thus far this offseason have primarily pointed to the team’s quarterback situation. Initially, reports indicated that they might be looking to upgrade from Jimmy Garoppolo.

While that might very well still be the case with Deshaun Watson on the 49ers’ radar, they have made it clear finding a top backup for Garoppolo will be in the cards.

With the NFL free agent tampering period having started on Monday, we now have some more information on this. To say it’s interesting would be an understatement.

“In January, I put Trubisky with the 49ers because that Kyle Shanahan type offense could really suit what he does,” NFL Media’s Mike Garafolo noted on-air Monday. “I’d give myself a fighting chance right now for that to be correct. I do gather that he is on their list of quarterbacks they are considering.”

A move of this ilk would be to both put Garoppolo on notice and add a valuable backup quarterback to the mix for the 2021 season. Remember, Garoppolo has missed 23 of a possible 48 games to injury over the past three seasons. The 49ers simply can’t rely on him to remain healthy, even if they plan on retaining the 29-year old quarterback.

As for Trubisky, a divorce with the Chicago Bears after four seasons seems to be in the cards. He was benched in favor of Nick Foles early during the 2020 campaign, only to lead the team to the playoffs after taking over under center. Even then, the numbers are not great surrounding the former No. 2 pick. The North Carolina product has thrown a mere 64 touchdowns against 37 interceptions in 50 career starts.

As it relates to 49ers rumors and the quarterback position, they currently have former Arizona Cardinals top-10 bust Josh Rosen as their top backup behind Garoppolo. While he might provide some upside in Kyle Shanahan’s system, relying on the UCLA product as a No. 2 makes no sense.

Interestingly enough, San Francisco’s reported interest in Mitchell Trubisky comes mere years after it pulled off a draft-day trade with Chicago. The 49ers moved down from the second selection to No. 3 overall, picking up Solomon Thomas in the process. Chicago went with Trubisky.

49ers rumors will continue to focus on quarterbacks

The major backdrop here is disgruntled Houston Texans star Deshaun Watson. San Francisco sits on the top of the list of teams he’d like to join. Unfortunately, the Texans’ brass is unwilling to listen to offer for the reigning NFL passing champion right now.

Meanwhile, the 49ers have also been linked to New York Jets quarterback Sam Darnold. There’s a good chance that he will be moved ahead of next month’s NFL Draft.

If the 49ers were to move off from Garoppolo for any of these options, it would save a nice amount against the 2021 NFL salary cap. In fact, they would be looking at a $23.6 million savings by trading Garoppolo.

Obviously, bringing in Trubisky would not factor into the equation here. He’s not going to be a guaranteed starter for any team that chases after the North Carolina product in free agency.

For now, everything seems to be pretty fluid on this front. Stay tuned.