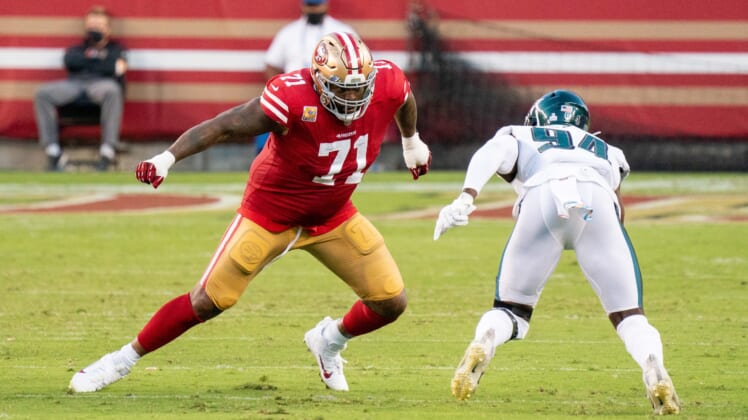 One of the best left tackles in modern NFL history, the 32-year-old Williams was acquired by San Francisco from the Washington Football Team during the 2020 draft after Joe Staley abruptly announced his retirement.

The eight-time Pro Bowler promptly slid in as the 49ers’ blindside protector, acting the part of one of the best offensive linemen in the NFL in the process. Now the top free agent set to hit the open market next week, suggestions are that Williams will re-sign with the 49ers.

Trent Williams hints at return to the San Francisco 49ers

Teammate Richard Sherman appeared on Chris Collinsworth’s broadcast recently to talk about NFL free agency. He predicted that Williams will return to the 49ers.

“I’ve got him staying in San Francisco for The Faithful. I think he stays in San Francisco,” Sherman said. “I think he makes you guys happy for another five (or) six years, and gets his gold jacket, and decides whether he wants it in Washington or San Francisco.”

This is obviously a pretty big story. While Sherman is expected to depart the cash-strapped 49ers in free agency, their primary focus outside of the quarterback position has to be left tackle.

As for Trent Williams, he’s likely looking at $20-plus million annually on the open market. It would be a high price for the 49ers to pay. But the alternatives simply are not any better.

The 49ers currently find themselves $28.64 million under the estimated 2021 NFL salary cap. A good chunk of that would be used to re-sign Williams.

However, any long-term deal would likely push back the big cap hits to later years given that a new television contract will create expanded salary cap numbers moving forward.

49ers rumors have also suggested that they will move off center Weston Richburg and edge rusher Dee Ford. That would save a ton of cap room. It’s also important to note that San Francisco can save $23.6 million against the cap by trading quarterback Jimmy Garoppolo.

Replacing Garoppolo with either Deshaun Watson ($10.5 million 2021 cap hit) or Sam Darnold ($4.8 million) would save the 49ers a ton of cap room — enabling them to re-sign Trent Williams among a whole host of other free agents. For its part, San Francisco has been linked to both quarterbacks as the team weighs a potential upgrade under center.

The 49ers are coming off a sorely disappointing six-win 2020 season. Said performance had a lot to do with struggles at quarterback and injuries throughout the campaign. Retaining Trent Williams would be a nice start ahead of NFL free agency.

However, there’s a ton more work general manager John Lynch has to do in order for San Francisco to be considered Super Bowl contenders in 2021.